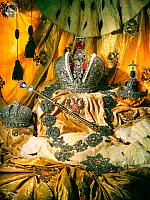 The state regalia are the highest symbols of monarchic authority. They consist of the crown, sceptre, orb, state shield, state seal, state banner, state emblem and throne. In addition, the regalia include certain types of robes, for example, the royal platno, a mediaeval garment, and later, when Russia became an empire with an emperor, the mantle, which was also called the porphyry.