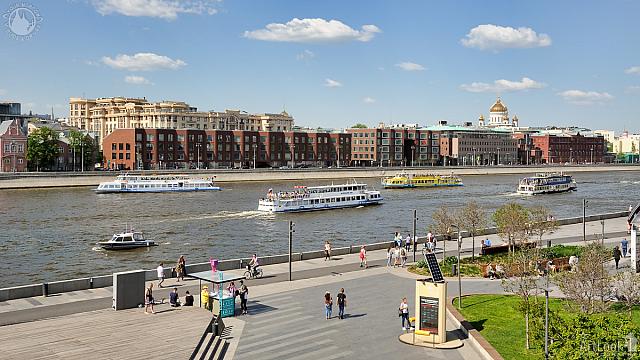 Passenger riverboats float up and down the river Moskva (Moskva) at Krymskaya (Crimean) Embankment during the 1st River Boat Parade 2018 on a nice sunny spring day. The view on the beautiful pedestrian embankment and the river from the Krymsky Most (Crimean Bridge).

Renewed a few years ago, the Krymskaya embankment looks much prettier than it did before: a plain driveway was turned into a green promenade area with fountains and hills. Here is located Vernissage market where artists exhibit their work, House of Artists with Modern Art Exhibition of State Tretyakov Gallery, and Muzeon Park known also as the Park of Fallen Sculptures.

Cheburashka is one of the most favorite and well-known characters in children's literature from a 1966 story written by Soviet writer Eduard Uspensky. And if you look at these funny pictures of Cheburashka, it is no wonder why kids and adults in the entire World fall in love with his sad eyes, big ears and nice song from animation movie! Cheburashka, who became one of symbols that represent Russia, sport and friendship, also became talisman for life of people in many countries, including American figure skater Johnny Weir.