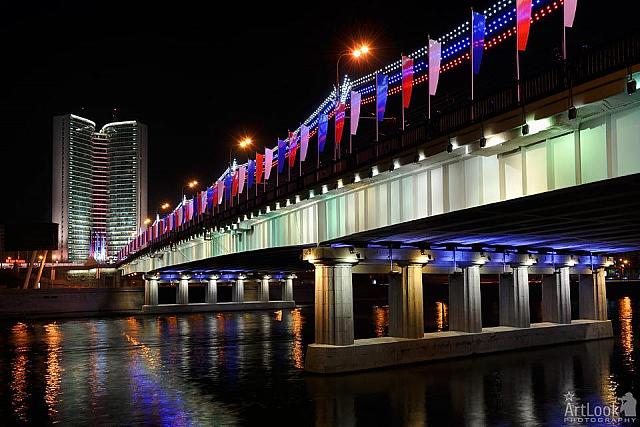 On September 6-7, 2014, to celebrate the Moscow City Day, the Novoarbatsky Bridge was decorated using the colors of the Russian National Flag - white, blue, and red.

Novoarbatsky Bridge which stretches across the Moskva River was designed by architects K. Yakovlev and A. Susorov in PC "Hiprotransmost" company and built in 1957. From this bridge, on 4 October 1993, the tanks fired at the White House (House of Government of Russian Federation) to end the most severe political crisis in post-Soviet Russia.

In the background of this picture you can see the former COMECON (The Council for Mutual Economic Assistance, СЭВ, SEV) building that has been the House of the Government of Moscow since 1990s. The famous building #36 on the New Arbat street was built using the design of architects M. Posokhin, A. Mndoyants in 1963-1970 and is an interesting example of post-WWII Soviet architecture. Muscovites call it "The Book" since it resembles an open book. Not only did the Soviet Union participate in construction of this office complex, but also all the country-members of the economic organization (SEV): Bulgaria, Hungary, German Democratic Republic (GDR), Poland, Mongolia, Romania and Czechoslovakia.

Celebrations of Easter (Paskha) - the biggest Russian Orthodox holidays in a year.