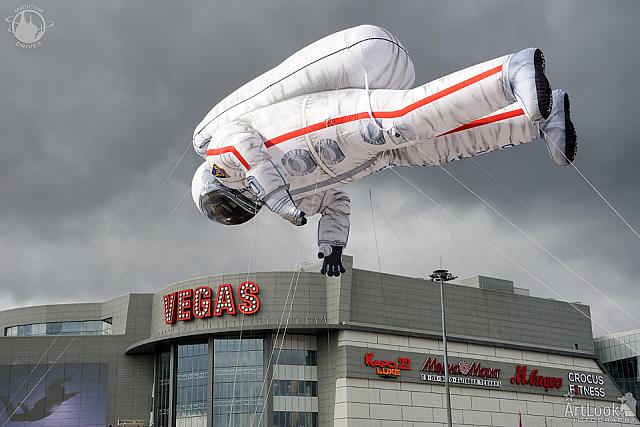 «Flying Over Vegas Under Grey Clouds»

20-meter giant balloon "Time of the First" in the form of an astronaut in a spacesuit flying near shopping and entertainment center Vegas Crocus City under grey clouds. It was launched into the sky over Moscow on April 12, 2017, Cosmonautics Day. The big-budget space exploration movie Vremya Pervykh (Time of the First) by Timur Bekmambetov’s company Bazelevs was released in Russia in 2017 to the current 56th anniversary of Yuri Gagarin's flight into space. The unique aerostat in height of a six-story house cast to the film company 3,5 million rubles (about 62.500 USD). The design of the balloon was developed on the basis of drawings and photographs of the original spacesuit "Berkut" (Golden Eagle), in which cosmonaut Alexei Leonov made the first exit into outer space on March 18, 1965, and the just released movie tells about this great event.

Illuminated Monument to Marshal Zhukov in the Dusk

Illuminated with powerful spotlights Monument to Marshal Georgy Zhukov at the building of State Historical Museum and a Kremlin tower in the summer evening. The monument to an outstanding leader, holder of two Orders "Victory", four times Hero of the Soviet Union, Marshal of the Soviet Union, "Marshal of the Victory" was established on the Manezhnaya Square in May 8, 1995 - in honor of the 50th anniversary of Victory in the Great Patriotic War.