Rising Again at the Square of Friendship of Nations 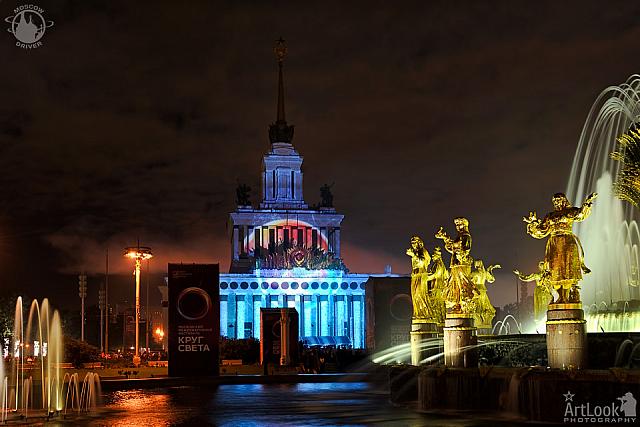 The view of the Friendship of Nations square at VDNKh (All-Union Exhibition of Achievements of Peoples Economy) during the annual International Moscow Festival “Circle of Light” from the side of a pool of the beautiful fountain "Friendship of Nations" that was created to glorify the people of the Soviet Union. Originally the square was called “Kolhoz Square” dedicated to collective farms in USSR, but later it was renamed by the name of the fountain.

The jets and gold-plated female figures of the beautiful fountain lit with powerful spotlights. The statues symbolize republics of USSR. The girls dressed in national costumes of the republics of Soviet Union have gathered around the fountain in a circle dance called in Russia “khorovod”.

The fragment of the fascinating 3D Mapping video show is projected on the facade of the Central Pavilion of the exhibition “House of Nations of Russia” in the background of the composition.

The building “House of Nations of Russia” at VDNKh exhibition became again one the main stages during the International Festival "Circle of Light" in Moscow. The pavilion built in 1954 in wedding cake style that was popular in the middle of 20th century, at that time were also built the famous seven Stalin high-rises (“Seven Sisters”).