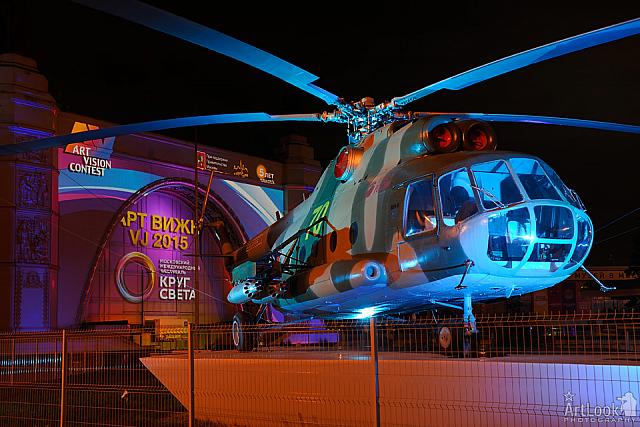 The Soviet Helicopter Mi-8T under lights of the 5th International Light Festival “Circle of Light” at All-Russia Exhibition Center. The helicopter is on display at VDNKh (short of All-Union Exhibition Center in Russian) near pavilion “Cosmos” (Space) (on the picture behind the helicopter) and model of rocket of Yury Gagarin “Vostok 1” (East One) from summer 2014, when the popular and famous exhibition center was renovated in honor of its 75th anniversary.

The transport and troop carrier helicopter Mi-8T (belonging to the Mi-8 helicopter family) is designed in 1960s for the landing and evacuation of troops, fire support of ground forces, as well as for the transportation of goods. The helicopter can carry op to 24 soldiers or be used as a cargo carrier. The Mi-8T is capable of transporting up to 4 tons of cargo inside the cabin or up to 3 tons of cargo on the external load. Mi-8T may carry various types of weapons on the racks. Moscow Helicopter Plant launched production of Mi-8T in 1965. The Mi-8 helicopter was the progenitor of the broad Mi-8/17 helicopter family, which is the most popular in the world. At the moment, more than 12,000 copies have been produced, which are used in more than 100 countries worldwide.

Kremlin Embankment at the Evening Rush Hours in Winter

View from Bolshoi Moskvoretsky Bridge on the bright new street lights and lines of car lights at the embankment of Moscow Kremlin at the Evening Rush Hours in winter season.