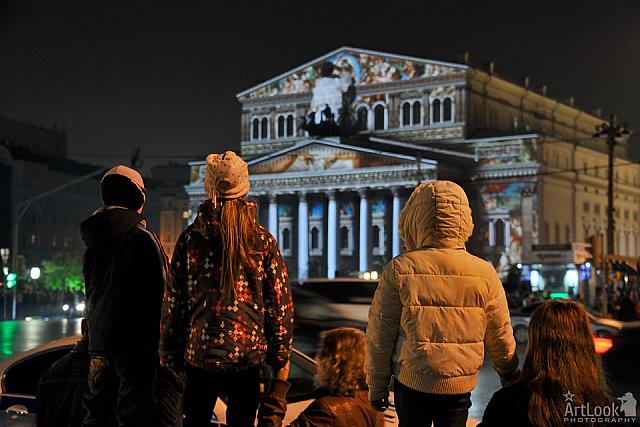 This picture shows a number of kids that climbed on top of the parapet of the underground pedestrian crossing in order to get a better view of the spectacular video mapping "Light Around the world" on facade of the world's greatest opera and ballet theaters, and one of Moscow's top visitor attractions, the Bolshoiy Theater.

From 2011, the Moscow International Festival “Circle of Light” became one of the most outstanding and exciting annual events for Muscovites and visitors of the capital of Russia. This year it successfully took place in Moscow for the 4th time lasting from 10th till 14th of October. Just like during the last year, the video projections was created on the building of Bolshoi Theater by Cosmo AV. This time the artist from France prepared an amazing show devoted to the main theme of the current festival “Traveling around the World in less than an Hour” that shown the world culture from the time of Antiquity till the present day, using all the newest lighting technologies.

Thousands of people came to the building of Bolshoi Theater to watch this spectacular show, which once again caused a major traffic jam in the area of the Theater Square, because it was filled not only by people, but also by driver which wanted to watch the show from the comfort of their cars.

In front of Triumphal Gate at Night

My dear clients from South Africa, Othelia Langner with her father Ben, in front of the Arch of Triumph on Kutuzovsky avenue during 3-hour evening tour of the best highlights of Moscow city at night.