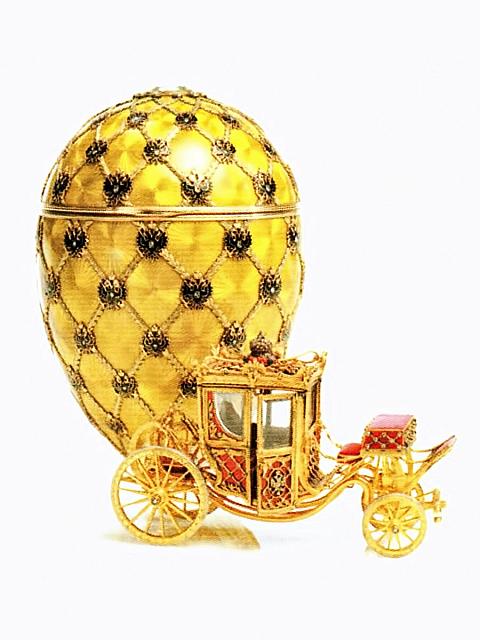 The Imperial Coronation Egg is a jeweled Faberge egg made under the supervision of the Russian jeweler Peter Carl Faberge in 1897 by Faberge ateliers, Mikhail Perkhin and Henrik Wigstrom. The egg was made to commemorate Tsarina, Empress Alexandra Fyodorovna. The egg is made from gold with translucent lime yellow enamel on a guilloch? field of starbursts and is in reference to the cloth-of-gold robe worn by the Tsarina at her Coronation. It is trellised with bands of greenish gold laurel leaves mounted at each intersection by a gold Imperial double-headed eagle enameled opaque black, and set with a rose diamond on its chest. This pattern was also drawn from the Coronation robe worn by the Empress. Nicholas II granted it to his wife Alexandra on Easter in 1897.

Fitted inside a velvet-lined compartment is a precise replica, less than four inches long, of the Eighteenth-century Imperial coach that carried Tsarina Alexandra to her coronation at Moscow's Uspensky Cathedral.

The red color of the original coach was recreated using strawberry colored translucent enamel and the blue upholstery of the interior was also reproduced in enamels. The coach is surmounted by the Imperial Crown in rose diamonds and six double-headed eagles on the roof; it is fitted with engraved rock crystal windows and platinum tyres decorated with a diamond-set trellis in gold and an Imperial eagle in diamonds at either door. The miniature is complete with moving wheels, opening doors, actual C-spring shock absorbers and a tiny folding step-stair.

Missing surprises include an emerald or diamond pendant that hung inside the replica coach, a glass-enclosed jadeite stand for the display of the carriage as well as a stand made of silver-gilt wire.

The Monument to Catherine the Great in Sevastopol

Sevastopol is widely known as the city of Russian Sailors and Russian Glory. It was founded in 1784 by Catherine the Great and intended to confirm the final conquest of the Russian Empire on the Black Sea.