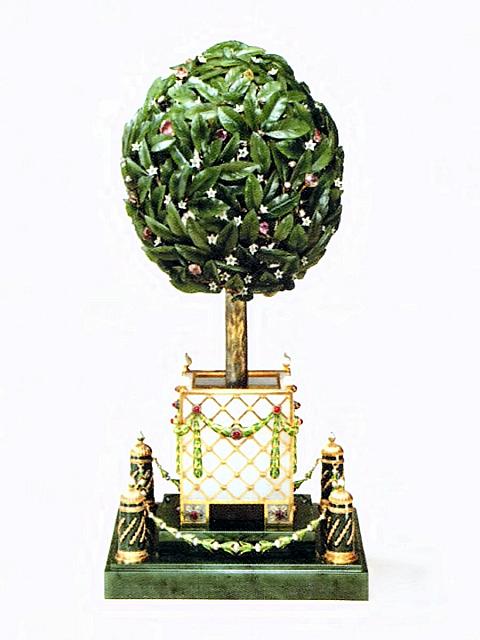 The Bay tree egg (also known as the Orange tree egg) is a jeweled carved nephrite and enameled Easter egg made under the supervision of the Russian jeweler Peter Carl Faberg? in 1911, for Nicholas II of Russia, who presented the egg to his mother, the Dowager Empress Maria Feodorovna on 12 April 1911. Its 1911 counterpart, presented to the Empress, is the Fifteenth Anniversary egg.

The egg is made of gold, green and white enamel, decorated with diamonds and rock crystal. The surface is divided into eighteen panels set with 16 miniatures. The egg's design commemorates the fifteenth anniversary of the coronation of Nicholas II on 26 May 1896.

Turning a tiny lever disguised as a fruit, hidden among the leaves of the bay tree, activates the hinged circular top of the tree and a feathered songbird rises and flaps its wings, turns its head, opens its beak and sings.

The front view of the residential Stalinist high-rise building on Kudrinskaya Square from a fountain at the beginning of summer framed by trees.