From another World - Church of The Sign in Dubrovitsy 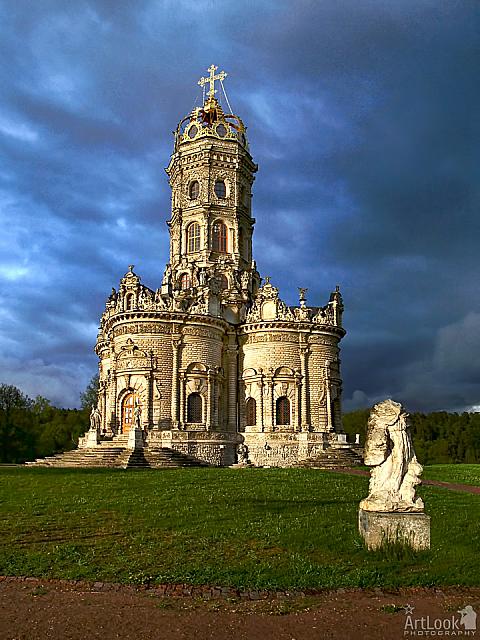 «From another World - Church of The Sign in Dubrovitsy»

The church of the Sign of Our Lady in Dubrovitsy located in 36 km from center of Moscow city (Podolsk district of Moscow Region) was erected by Italian masters in 1704 according to the order of prince Golitsyn, a teacher of Peter the Great. Among its special features is the golden crown instead of a usual dome. Peter I attended the procedure of new church consecration, but since the very beginning the building in baroque taste was a matter of disputes and disapproval of official Russian Orthodox figures. The church Of Holy Virgin Of Sign has been closed and opened for several times during its 300 history.

This time the sky time was covered by very grey dark clouds and I could predict that it will be very strong rain, even storm, very soon. So that, I returned back to my car right at the moment when it was started rain. Fortunately, it was not as heavy as I thought. We had a chat with my client during several minutes and I almost run engine to return back to city after long trip to Moscow Countryside during the day, BUT... it was like miracle, the rain stopped at those moment and sky cleared up a little bit on the side and the church became lighted through the dramatic dark clouds... looking even more impressive then I had seen it before. It was already evening time and we were pretty tired, but I concentrated all my energy and run out from my car toward to the church, holding my new camera in one hand and preparing camera for the new shooting by another hand . I remember, that I was making the new pictures almost non stop moving, because of I was very afraid that this beautiful sun light illumination could be disappeared.. all around this area were covered with very dark skies.

Photo #471 taken on May 22, 2006 during countryside tour to discover historical sites of Moscow Region (South Direction) with my Dear client from Canada Annie Budz.

Angle view of the golden onion shape cupolas of the main cathedral of St. Nicholas monastery in Pereslavl-Zalessky The impressive domes shine with crosses against the blue sky with white clouds. The beautiful St. Nicholas church was built in 1999-2003 in the style of XIV-XVI century Russian architecture (design by architect V.