The Cathedral of St. Sergius of Radonezh in Mytishchi 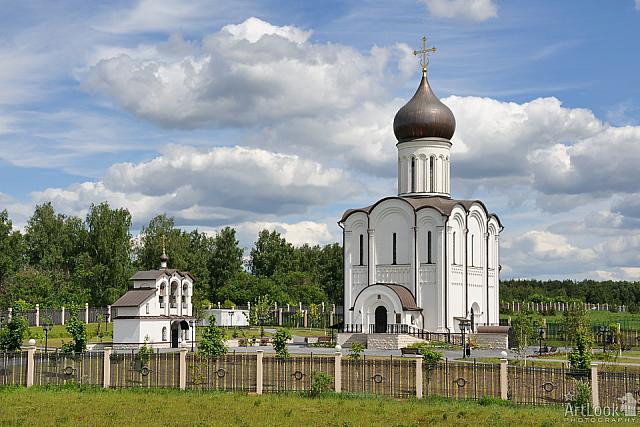 «The Cathedral of St. Sergius of Radonezh in Mytishchi»

This majestic Orthodox Cathedral constructed in a similar style to other important white stone Russian churches from the 12th century such as St. Demetrius Cathedral (or Church of the Intercession) on the River Nerl in Vladimir, was built between 2013 and 2014 in the grounds of the Federal Memorial Military Cemetery in Mytishchi.

The cathedral is named after St. Sergius of Radonezh, the patron saint of the local area situated between Sergiev Posad and Radonezh villages. The church, consecrated on November 5, 2014, was built in honour of the 700 year anniversary of St. Sergius’ birth (1314 – 2014). Construction was done by Yuvenaliy, the Metropolitan Krutitsky and Kolomensky. In this church, soldiers and officers pray for the success and safe return of their commanders, leaders and comrades.

Alongside the church stands a small, old style belfry (in Russian “zvonnitsa”) with nine bells. The largest bell - “Blagovest” (or good news bell), weighs approximately 1 ton and was cast in Kamensk-Uralsky, the “bell capital” of Russia. Masterpieces from the Kamensky Iron Foundry (established in 1701) can be heard ringing all around the World: from the bell towers and belfries of St. Basil’s Cathedral, the Moscow Donskoy Monastery, the Marble Palace in St. Petersburg, Mount Athos in Greece, to Orthodox parishes in the USA and Canada.

Domes and Towers of the Troitse-Sergiyeva Lavra

A beautiful view of the architectural ensemble of the Holy Trinity –St. Sergius’ monastery in Sergiev Posad from Blinnaya Gora (Pancake Hill). On the hill is located observation deck where opens a picturesque panorama of the largest monastery in Russia often nicknamed the “Russian Vatican”.