Fountains Along The Offlet of Moscow River 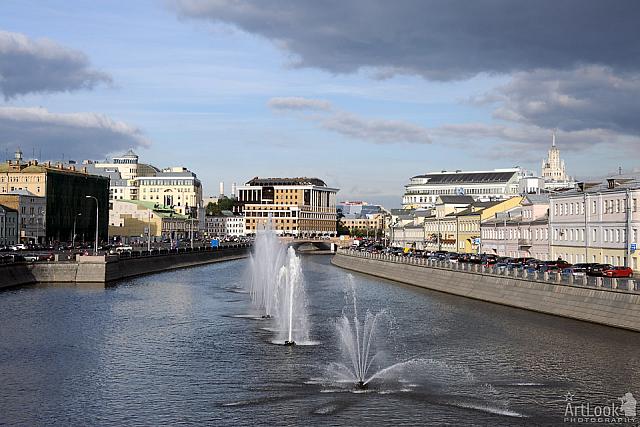 «Fountains Along The Offlet of Moscow River»
The plan to construct the catch water drain of Moscow River was presented in 1775 to protect the areas nearby Moscow Kremlin from foods. The project was realized later in 1783 during repairing of Big Stone Bridge over Moscow-River when it was broken after another spring flood. During 19 and 20 centuries it was perfected and after constructing new overflow weir the offlet lost its original function. In present days the banks of the canal strengthen with concrete walls and faced with granite slabs. The catch water drain is 4 km long, from 30 to 50 meters wide and about 2 meters deep. Photo #071 taken on September 03, 2012 during city tour with Andrea and Zoltan Toth from USA.
Next Previous 65 of 87

A Foggy and Rainy Night Along the Moscow River and Kremlin

Though that chilly April evening was foggy and rainy, it offered me a special view of Moscow Kremlin from Bolshoy Kamenny Bridge (Big Stone Bridge) over the Moskva river. Despite that it is a center of a big megapolis (Moscow city is one of the biggest capitals in Europe), it was a very quiet night and it was nice to see several couples stopping under the rain on the bank of the river to admire view of the main architectural ensemble and stronghold of the city.