A Flock of Ravens Flying Over the Holy Rus 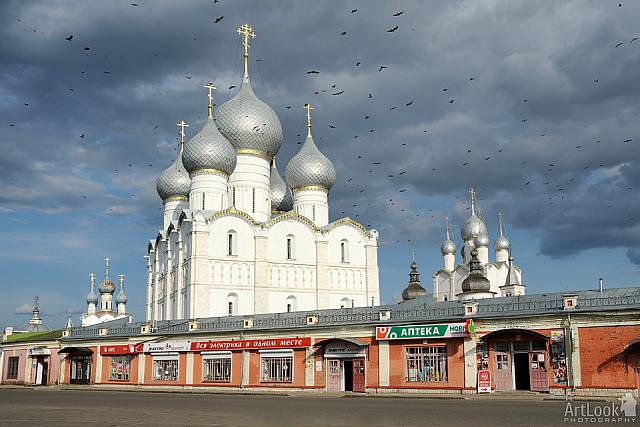 «A Flock of Ravens Flying Over the Holy Rus»

Over the centuries, many enemies, as though a flock of hungry crows, swarmed over our lands, trying to tear at the flesh of Mother Russia (Rus). However, all their attempts have failed and they had to fly back from whence they came from, since our people are Orthodox Christians and the God and Virgin Mary are looking over the safety of our lands. Even though during the Soviet times much of the heritage of the Orthodox Church was destroyed, in present times the Orthodox Church is regaining its former glory.

On this picture you can see the Sobornaya Ploszhad (Cathedral Square) of Rostov Velikiy, with magnificent onion-shaped domes of Assumption cathedral, the main church in the ancient city built in second half of 16th century.

Photo #107 taken on August 11, 2014 during long distance countryside tour to Rostov Velikiy, the town of the Golden Ring of Russia located on the Lake Nero.

Angle view from a 4-th tier of the bell tower of Holy Trinity – St. Sergius Lavra on the snow-covered Dormition (Assumption) Cathedral of Our Lady topped with beautiful onion blue and golden domes with crosses during a snowfall in a winter season.