Bell Tower and Assumption Cathedral of Vladimir in Winter Dusk

Tweet
Photo Gallery Personal Tour Samples Discovering Suzdal and Vladimir with Esther and Ricky from Hong Kong at Dec 24-25, 2018
Next Previous 14 of 16 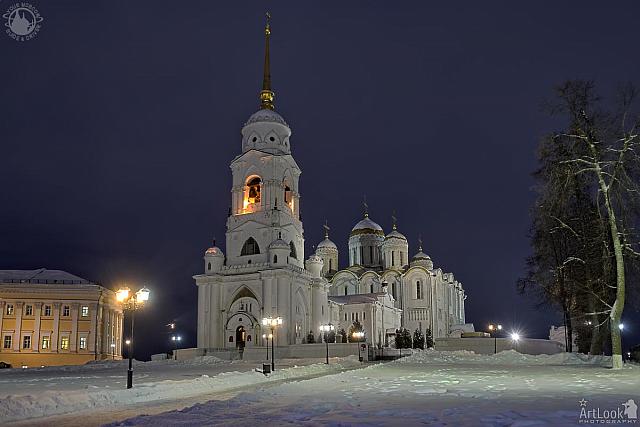 «Bell Tower and Assumption Cathedral of Vladimir in Winter Dusk»

Covered snow the architectural ensemble of 19th-century bell-tower and 12th-century Cathedral of the Assumption (Dormition) of Our Lady in the historical center of Vladimir city in the dusk of a winter evening.

The tall bell-tower, the multi-tiered structure 56 meters (184 feet) high with a pointed spire reaching for the sky, was built in Classic style in 1810 by architect A.Vershinsky. The majestic ancient Assumption Cathedral is the unique monument of early Russian white-stone architecture of the twelfth century.

Photo #658 taken on December 25, 2018 in Vladimir during long-distance countryside 2-day tour to the cities of Golden Ring of Russia with my dear clients from Hong Kong, Esther and Ricky.

Church of St. George framed by Trees on Poklonnaya Hill at Night

Night view of the illuminated by spotlights at night the church of St. George the Victorious. The golden-domed church was erected in neo-Russian style of architecture on the hilltop of Poklonnaya Hill in 1993-1995. It is a part of the Victory memorial park dediicated to the Great Patriotic War 1941-1945.