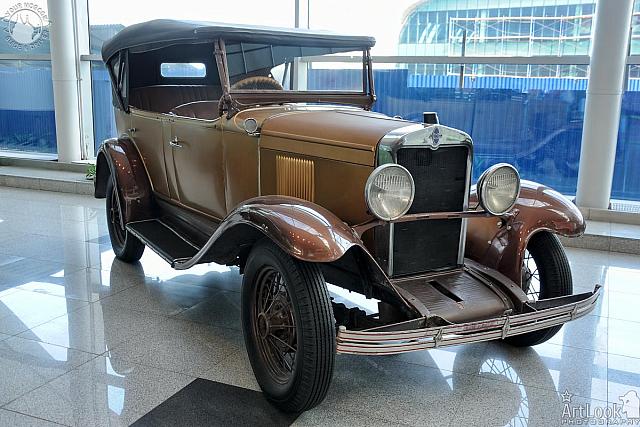 Front-angled view of a brown Chevrolet AC Open Tourer built at the year 1928 vintage car at the free of charge pop-up exhibition in a new domestic atrium of the Moscow Domodedovo airport terminal.

In the automotive world, the Chevrolet AC was called the "Rivet Six" because of its quarter-inch panhead mounting bolts throughout. Chevrolet Series AC - Launched by Chevrolet General Motors in 1929. Almost 850,000 units were produced in 10 different body styles. The series was the first to own a six-cylinder engine from a 1915 Chevrolet and was advertised as “Six Cylinders for the Price of a Four-, which increased only $ 10 more than the previous AB four-cylinder series. six cylinders played a significant role, because -Ford- used only a 4-cylinder low-valve engine, and cost the same as an AC with six cylinders. The model replaced the vacuum reservoir with a new mechanical pump. The engine became the basis of a family of motors that have been produced for over two decades. This car successfully survived the years of depression. Thanks to it, Chevrolet soon became the leader in the American market.