Sculptures of Folk Tales in the Neglinnaya River Fountain Ensemble 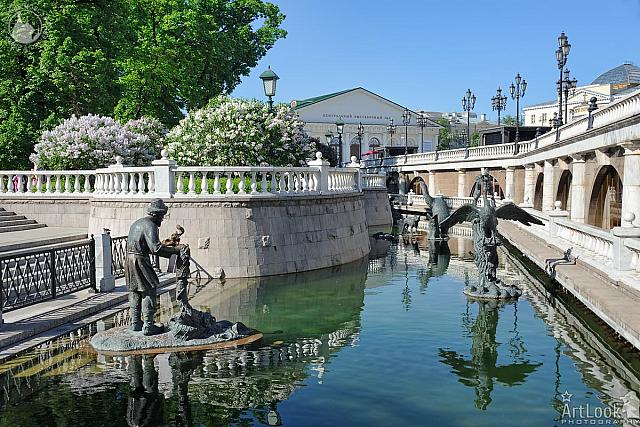 «Sculptures of Folk Tales in the Neglinnaya River Fountain Ensemble»

Composition of sculptures from Russian folk tales, Krylov's fables, and other folklore in the Neglinnaya River fountain ensemble on the border of Alexander Garden and Manezhnaya Square on a beautiful spring day in May. The large composition of the heroes of Russian fairy tales is a bronze sculpture by Zurab Tsereteli, installed in 1996 on the artificial river Neglinka, which symbolizes the river bed hidden in an underground sewer. This is part of the great architectural project for the reconstruction of Manezhnaya Square, which was completed in 1997 in honor of the 850th anniversary of Moscow city.

In the foreground of the photo is a bronze sculpture of the Old Man with a Goldfish, dedicated to the heroes of Alexander Pushkin's fairy tale "The Tale of the Goldfish." There is a sign that if you rub the fish with your hand, then it will fulfill any desire only if you ask it correctly. Therefore, the bronze fish still shines like gold to this day. :-)

Photo #026 taken on May 18, 2019 during Moscow city tour with my Dear clients from Austria, Herbert and Maria Petschar. 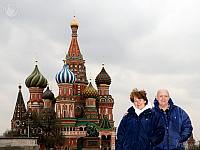 My Dear clients from Australia, Tom Watson and Kerry Judd, on Read Square in front of the famous St. Basil’s cathedral built by Ivan IV The Terrible in 1561.