Autumn view from a hill in park Zaryadye on the top of St. Basil's Cathedral with beautiful colored onion domes and Savior tower of Moscow Kremlin with clock frames with yellow trees in background with pink colored clouds at autumn sunset.

The new innovative park in the historical center of Moscow city shows the features of different Russia’s lands and includes artificial micro-climate areas with plants representing Russia’s steppes, tundra, wetlands, and forests. The spectacular Zaryadye Park was opened to great fanfare on September 9th, 2017, with President Vladimir Putin and Moscow's mayor to mark the 870th anniversary of the capital of Russia.

The Intercession Cathedral on the Moat, which in the last couple of centuries became better known as St. Basil’s Cathedral, was built in 1555-1561 by Tsar Ivan IV the Terrible (1530-1584) to commemorate the conquest of the Kazan Khanate (ancient Tatar kingdom of Volga Bulgaria) by the first Tsar of All the Rus (Russia). The construction of Intercession Cathedral at Red Square became one of the steps in promoting an idea to build Moscow as “The Third Rome” (after Constantinople).

The Kremlin's most famous tower, Spasskaya (Savior's) tower, is located on the Red Square and originally was built in 1491 by Italian architect Pietro Antonio Solari. At the beginning of 17th century, in 1624-1625, the tower was overbuilt and the first clock with chimes was made and installed on the slender gorgeous tower decorated with lavish carved white stone. 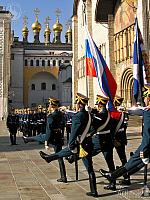 Any photographer knows that it is not so easy to take excellent picture to memorize important event, to show an atmosphere of fascinating action, especially, if it takes place in a big city and many people as you intend to watch the show and take some photos.