Sculpture of Worker and Collective Farmer in Gold Light at Sunset 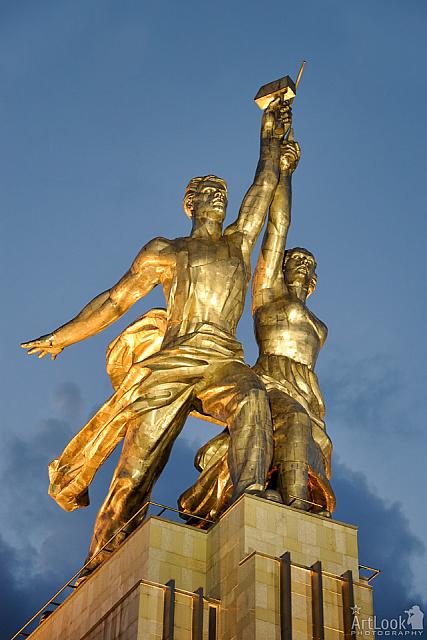 «Sculpture of Worker and Collective Farmer in Gold Light at Sunset»

The angle view from Prospekt Mira (Avenue of Peace) on the made of stainless steel sculpture of the Worker and Collective Farmer (Rabochiy i Kolkhoznitsa) lit in a gold light at summer sunset.

The monument is set on high pediment (34,5 m) depicts a young man and a girl, personifying the Soviet Union: its working class and collective farming. Together they raise the emblem of the Soviet State – a hammer and sickle. The sculpture was created by artist Vera Mukhina to crown the 37-meter-high Soviet pavilion of the World’s Fair in Paris in 1937. The weight of the 24,5-meter monument made of steel is about 80 tons. In 1939 the sculpture was established in front of VSHV, Agriculture exhibition of the Soviet Union, that later was renamed to VDNKh, All-Union Exhibition Center. It became the symbol not only of the famous exhibition but also the symbol and the ideal of the soviet epoch.

See another picture from this set: Monument “Rabochiy i Kolkhoznitsa” in Gold Light at Sunset.