Statue of Turkmenia in Spray of Water Fountain 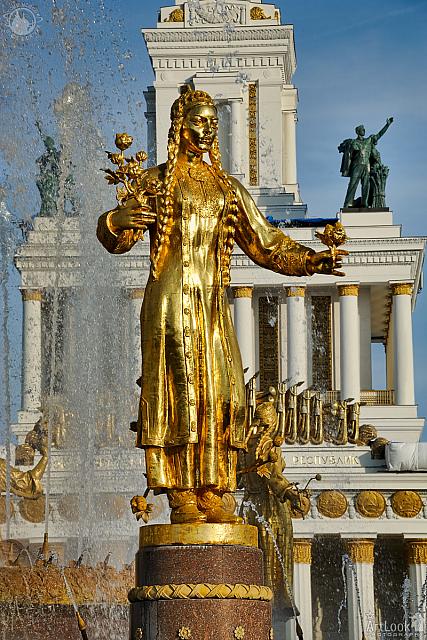 «Statue of Turkmenia in Spray of Water Fountain»

Statue of Turkmenia in Spray of Water Fountain of Friendship of Nations in the background of the recently restored 97-meter tall main pavilion of the VDNKh exhibition “House of Nations of Russia” (Pavilion #1) at the nice summer day in the middle of August. The bronze gilded female figure is one of the sixteen sculptures of the fountain built at VDNKh exhibition in 1954 on Kolkhoz Square (in present time the Square of Friendship of Nations). It represents the Republic of Turkmenia of Soviet Union and dressed in the national costume of the country. The “Golden Girl” holds a stem of cotton that planted in Turkmenia. A model for the statue became Turkmen pianist Gozel Annamamedova, who was in those early years a student of the Moscow Conservatory.

Photo #285 taken on August 17, 2018 during Moscow city tour with my dear clients from Canada, Michael, Helja and Kajsa