Statue of Armenia at Sunset 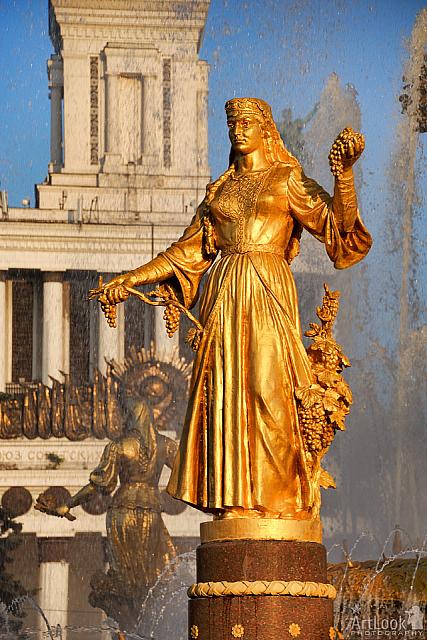 «Statue of Armenia at Sunset»

The fragment of fountain “Friendship of Nations” at VDNKh represents Armenia republic of Soviet Union. The bronze gilded female figure dressed in the national costume of the country holds bunches of grapes in her hands.

VDNKh is short for “All-Union Exhibition of Achievements of National Economy”, but it was founded and raised from 1939 to 1959 as VSKhV, the “All-Union Agricultural Exhibition”. The grape and wine sector in Armenia is one of the main agriculture industries in the country that famous for its unique wine-makers since ancient times.

A little known fact is that each statue was created in the image a young lady from each respective republic. Thus, every “golden” girl was once a real model – a living embodiment of her smaller homeland.

Photo #618 taken on June 08, 2014 during walking tour in VDNkh exhibition with my Dear client from USA, Jan Squires.

The view of a fifteen glowing umbrellas floating in the air above Morskaya street (Sea Street), near the intersection with the embankment named after Lenin at Yalta city center. This evening illumination was established at the expense of sponsorship funds in early August 2015 on a project prepared by the Russian company Omega, which is engaged in installing architectural lighting in St.