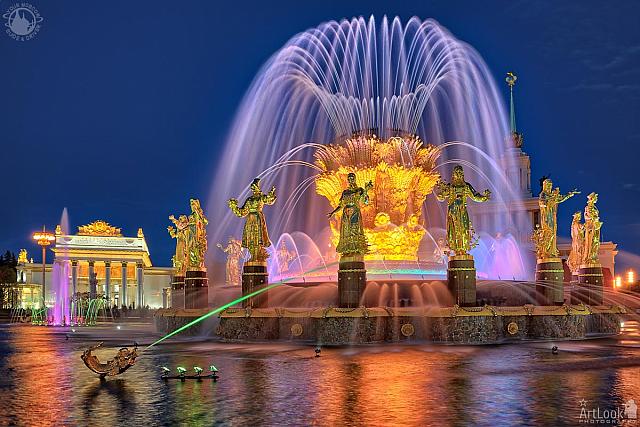 View of illuminated with colorful spotlights the fountain "Friendship of Nations" on the grounds of VDNKh park in the twilight at one beautiful spring evening. The fountain was under comprehensive restoration about 1 year and it was reopened at the end of April 2019. All statues of maidens dressed in the national costumes of the sixteen Soviet republics, the golden wheat sheaf, and fishes in its water pool were gilded again and all fuses of water jets were fixed. In present time it gained features of a dancing fountain that changes the height of its water jets from time to time. New colored spotlights at the golden wheat sheaf and at golden fishes in the water pool give to the fountain a gorgeous appearance in the evening time when it is getting dark.

Originally the fountain of Friendship People was opened in 1954 and became the symbol which reflects the celebration and high spirits associated with the victory in the Great Patriotic War 1941-1945, embodying the national dream of prosperity in the whole world.

Pavilion of the RSFSR (Atomic Energy) can be seen in the background of the picture at the left side. Originally the pavilion was built in 1952-1954 in the style of the Stalin Empire, but it was reconstructed several times to serve for different exhibitions including Atomic Energy project in the 1960s. Recently, in 2018, the building was restored according to its original 1950s style with a big sign on its facade in Russian: Russian Soviet Federative Socialist Republic (RSFSR).

Christmas Trees Under Canopy of Lights at Lubyanka in Twilight

Beautiful Christmas trees on Lubyanka square in Moscow under canopy of lights in twilight when it gets dark. The festive Moscow streets and squares were richly decorated with New Year and Christmas decorations in two weeks before upcoming popular in Russia and the whole world the magic winter holidays.