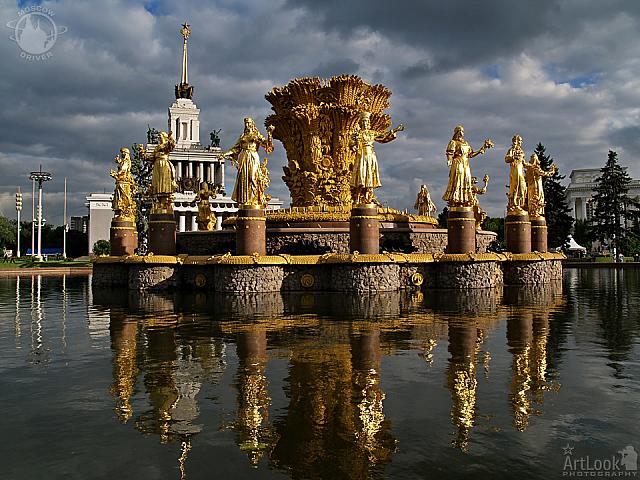 When I walked at the All-Russian Exhibition center the Fountain of Friendship of Nations was turned off and was pretty cloudy and no sun light.... but at one moment the sun appeared throughout the grey skies and it was so incredible contrast with these beautiful golden statues, so I decided to make several shots...

"Friendship of Nations" is the main fountain at the All-Russian Exhibition Centre (VVTs). The Fountain has gilded statues of maidens in the national costumes of the sixteen Soviet republics demurely encircle a golden wheat sheaf.

On the background you can see the main pavilion (House of Russia's Nations) which was built in 1954. It has a strong vertical 56 meter-high tower decorated with gold-plated cereal pattern shot up in front of the entrance to the pavilion. The pavilion crowned by the spire with the star is rising to almost 100 meters high by ledges resembling steps of a gigantic staircase, hovering over the entire exhibition ensemble.

Inside the Light Tunnel on Tverskoy Boulevard

A couple makes selfie walking inside the 100-meter light tunnel on Tverskoy Boulevard in a thaw in Moscow in few days before upcoming new 2018 year.