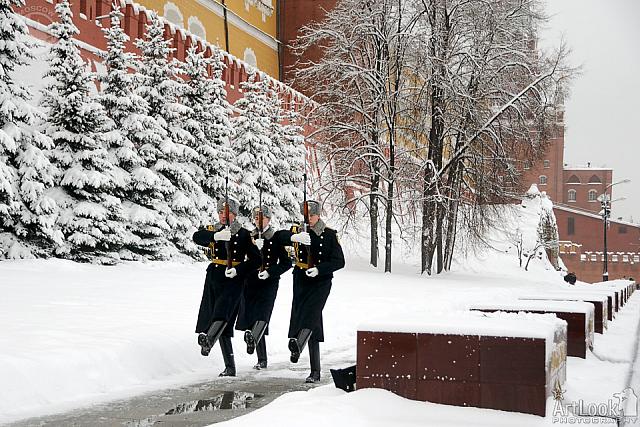 «Guard of Honor Coming»
In hot summer or cold winter the soldiers of President Regiment stand on guard at the Tomb of Unknown Soldier, the main war memorial dedicated to more than 10 million of Soviet Soldiers perished during the Great Patriotic War 1941-1945. The memorial was officially opened to the public at Kremlin wall in Alexander garden during celebrations of 22th anniversary of the Great Victory on May 08, 1967.
Next Previous 4 of 7

Changing with Respect in Silence

During the ceremony of changing the honored guards at the Tomb of Unknown Soldier, the soldiers from Kremlin regiment turn their heads toward each other with respect, as if saying in silence: “the post turned over” – “the post taken over.” The picture was taken under snowfall in winter season, the soldiers and beautiful pine trees were covered with snow and it gave a special touch to this moment…