When walking around indoor gallery with floral ornaments… 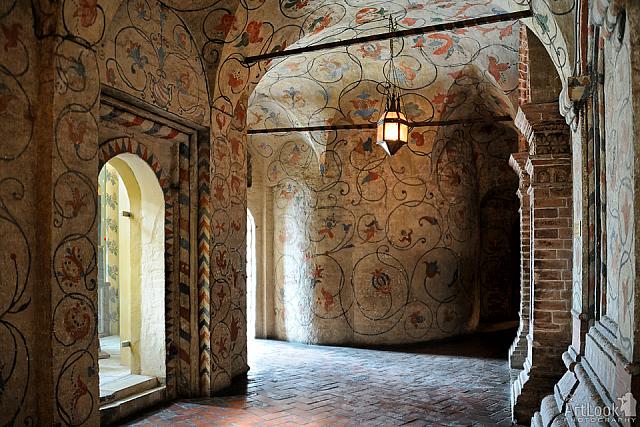 «When walking around indoor gallery with floral ornaments…»

After you finished admiring the exterior of the famous cathedral from the Red Square, you go inside it and see all the narrow, dim passages embellished by floral ornaments and antique lamps, feelings as if you've entered another world. In my opinion, while you're there, you can easily imagine that you've traveled back in time and about to meet people dressed in caftans, or maybe even personally meet Ivan the Terrible praying in one of its chapels … ?!

Unfortunately, the original 17th century floral paintings on walls were lost after numerous fires and troubles in the city that also concerned to the famous church on the Red Square. The frescoes with rich floral ornamentation were restored several times; once in 18th century and once again in the Soviet times in 20th century. The old, antique lamps light up the narrow and dark passages of the gallery that connects all (eight) chapels with the church of Intersession of the Virgin, the main church of the cathedral.

Photo #126 taken on September 10, 2014 during tour of St. Basil's cathedral with my Dear clients from USA, Irwin and Marci Becker.