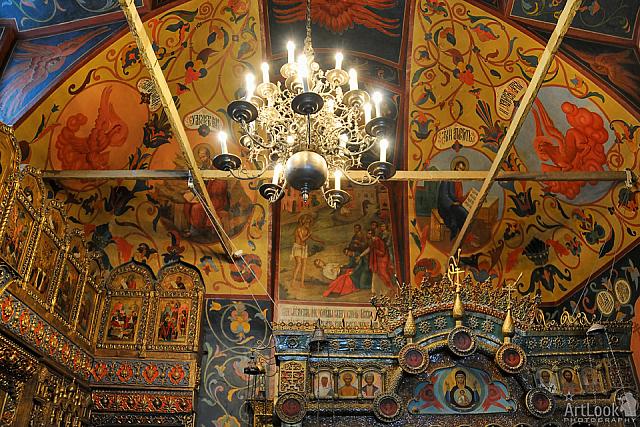 Interior of one of chapels of the Cathedral of Intercession of the Virgin on the Moat (St. Basil’s Cathedral) that was adjacent to the already constructed temple on the Red Square in 1588, , when Church Assembly canonized Basil as a saint. The small chapel from brick and stone was built during the reign of Tsar Feodor right on the grave of Basil the Blessed, a street prophet, vagrant, worshipped in Moscow at the time who had died in 1557, during construction of the famous cathedral commissioned by his father, Ivan IV The Terrible. According to legend, Basil was revered and feared personally by the first Russian tsar and buried at northeastern corner of not finished yet Intercession Cathedral (1555-1561).

On this picture is shown beautiful vaults of the Chapel of St. Basil’s adorned with restored 17th century frescoes representing floral ornaments and icons of St. Basil’s with Scenes from His Life , nice bronze panikadilo (church chandelier), top of wood carved gilt iconostasis (at the bottom left) and top of a richly decorated canopy above the shine of the Saint (at the bottom right).

Photo #045 taken on February 07, 2015 during one day city tour of the best Moscow attractions with my Dear clients from UK, Sheila and Janet Kitson.

Interior of the Epiphany cathedral in Yelokhovo (Yelokhovskiy sobor). The church has beautiful five-tier gold-plated iconostasis with several miracle-working icons.