Under Chandelier of the Holy Martyrs Cyprian and Justina Chapel 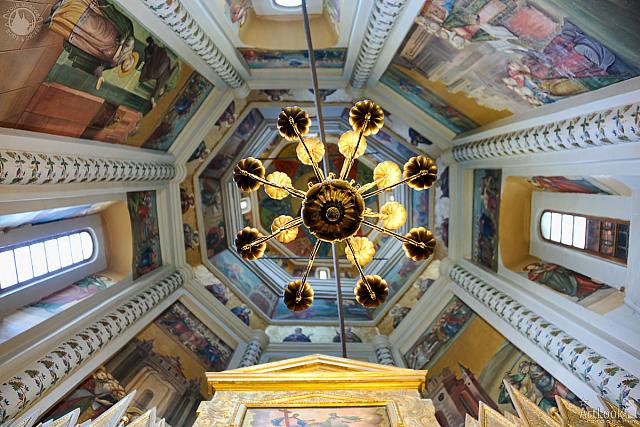 «Under Chandelier of the Holy Martyrs Cyprian and Justina Chapel»

View from under the church chandelier on the ceiling interior of the Northern Chapel of St. Basil’s Cathedral dedicated to the Holy Martyrs Cyprian and Justina (commemorated on October 2 (old style) / 15 (new style)) is decorated with image of Our Lady “The Unburnt Bush” (Neopalimaya Kupina The chapel built like a tower is quite small by footage, but very tall. Its walls painted with beautiful frescoes based on scenes from the life of Cyprian and Justina. The ancient Orthodox Church processional banners, small bronze chandelier (panikadilo), narrow lantern windows and top of a tiny iconostasis as details of its interior also compels attention on this picture.

Hieromartyr Cyprian and Virgin Martyr Justina suffered for Christ at Nicomedia in the year 304. On October 15, the feast day of the Holy Martyrs, the capital of the Kazan Khanate, fell in the course of a fierce storm during combat assault of Russian warriors led by first Russian tsar Ivan IV the Terrible. That is why one of eight side chapels of St. Basil’s cathedral was dedicated to these martyrs.

The individual chapel of the Holy Martyrs Cyprian and Justina of St. Basil’s cathedral was restored in 2007 on money commissioned from JCK "Russian Railways" (JSCo "RZD"). The exterior of is dome painted blue and white colors and can be easily recognized from the far distance, especially if you stand on the Red Square (the best view of this chapel from the side of the famous square).

Photo #017 taken on September 06, 2018 during a tour of St. Basil's Cathedral with my dear clients from Australia, Paul and Catherine Teare.

Cheburashka is one of the most favorite and well-known characters in children's literature from a 1966 story written by Soviet writer Eduard Uspensky. And if you look at these funny pictures of Cheburashka, it is no wonder why kids and adults in the entire World fall in love with his sad eyes, big ears and nice song from animation movie! Cheburashka, who became one of symbols that represent Russia, sport and friendship, also became talisman for life of people in many countries, including American figure skater Johnny Weir.