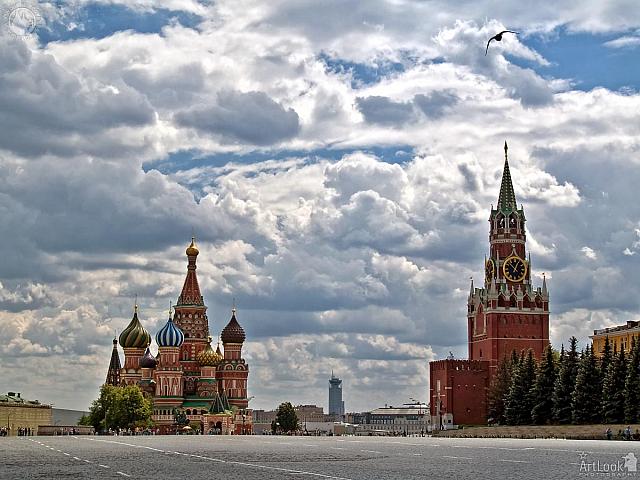 «Bird's Flight Over the Red Square»

Till 2008 when Lenin's Mausoleum (Lenin's Tomb) was opened they cordoned off the whole Red Square to secure the main square of Russia, so-called by citizens "The Heart Of Russia" from 10 am to 1 pm (open hours of Lenin's mausoleum). From the times of USSR any flights (planes or helicopters) are still forbidden over Moscow city (only by special occasions with permission of Ministry of Air Force Defense) and only a bird can pass so many restrictions and make the free-fly over Red Square.

In this picture you can see the view on the famous St. Basil's cathedral and the most remarkable tower of Moscow Kremlin - Savior's Tower from the right side of State Historical Museum.

Festive firework rockets bursting in big sparkling white balls lit up the night sky over the Kremlin and Red Square on the celebrations of the 869-anniversary of Moscow city. The view from Sofiyskaya embankment on Bolshoi Moskvoretsky Bridge and St. Basil’s Cathedral on Red Square located at the other side of Moskva River (Moscow River).