Old Arbat (Stary Arbat) is one of the oldest and most popular walking streets in the downtown of Moscow city, not far from Moscow Kremlin in West direction. There are many attractive old buildings, gift shops, cafes and restaurants on the popular for tourists Old Arbat, one of the famous landmarks in Moscow. 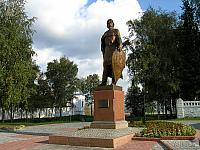 The monument to Alexander Nevsky (1220-1263), the Prince of Novgorod and Grand Prince of Vladimir, stands on the site of the monastery of the Nativity of the Mother of God where he was buried. It is the memorial to the legendary man who was able to defeat Russian lands from German and Swedish invaders and commonly regarded as the key figure of medieval Rus, was made from bronze and marble by the sculpture of S.