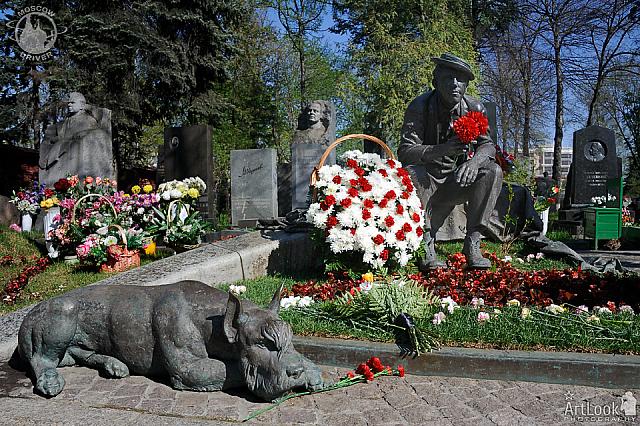 «Grave of Yuri Nikulin»
Author of the monument: sculptor A. Rukavishnikov Features: the bronze figure of well-known Soviet and Russian actor and clown who starred in many popular films sits and smokes near his favorite dog, giant schnauzer Fedor.

Graduated from an artistic speaking genre studio in 1949. In 1949 Yuri Nikulin joined the Moscow Circus (worked as a clown in a pair with Shuidin). In 1982 he became the director of the circus on the Tsvetnoy Boulevard (Old Circus), in 1970 - USSR State prizewinner of the (named after Vasiliev brothers). Peoples Artist of the USSR. «Kinotavr» prizewinner in 1995. Nikulin played in many movies: « When the trees were big», «Diamond arm» and etc. Although he mainly played comic parts, he also played in dramas: «They fought for their motherland», «Twenty days without war» and etc. Peoples Artist of the USSR (1973). Photo #140 taken on May 08, 2013 during a tour of Novodevichy Necropolis with my Dear clients from Australia, Sam Peacock and Tracy. ©2013 Moscow-Driver.com by Arthur Lookyanov
Next Previous 14 of 17

View from Krepostnaya Chamber (Treasury Building) on the one of the tallest bell towers in Russia that was erected in 18th century on Cathedral Square - the main square of the Holy Trinity St. Sergius Lavra in Sergiyev Posad. This five-tired 88-meter unique tower was designed by architects Shumacher and Uhtomsky and the construction lasted from 1740 to 1770 during the reign of two empresses, Elizabeth and Catherine the Great.