Smolensky Church and Prohorov Chapel Framed by Trees in Snow 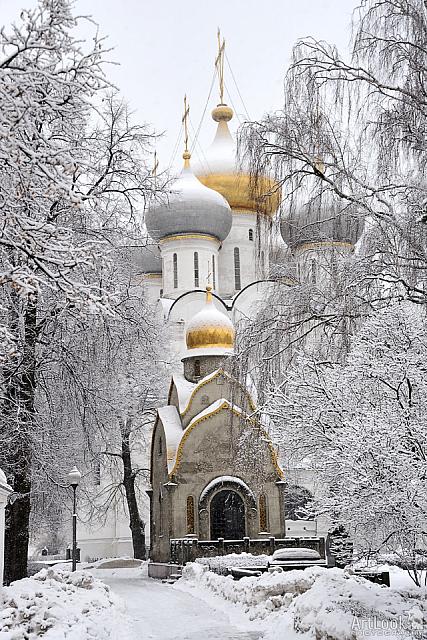 «Smolensky Church and Prohorov Chapel Framed by Trees in Snow»

The view of beautiful architectural ensemble of Novodevichy convent, Smolensky Cathedral and Chapel of Prohorovs,framed by trees and covered with snow after heavy snowfall on a first day of spring in March 2013. The magnificent stone cathedral in honor of a miracle-working icon of Mother God of Smolensk was founded in May 13, 1524 and consecrated on July 28, 1525. It dates back to the foundation of this famous convent laying near the bank of Moskva river, a few kilometers from Moscow Kremlin.

A small burial chapel of the Prohorov family stands in front of the main church of the convent. The chapel was built in 1911 in pseudo-russian style on money of Nikolay Prohorov, son of Ivan Prohorov, the owner of Trehgornaya textile manufacture as burial vault of members of his family in necropolis of the convent. Its helmet-shaped dome typical for pre-Mongolian Russian architecture is covered with gold color - the symbol of Jesus Christ and Celestial Glory.

Photo #038 taken on March 01, 2013 after heavy snowfall during tour of Novodevichy convent with my Dear clients from Australia, Richard and Stacy Host.

The illusionist Safronov Brothers play the trolls in the fascinating ice show “The Snow King”. They also learned seven tricks from master magician David Copperfield, and they perform these magic tricks during the show. Due to these world-famous illusionists the fairy tale on ice by Evgeni Plushenko became truly magical.