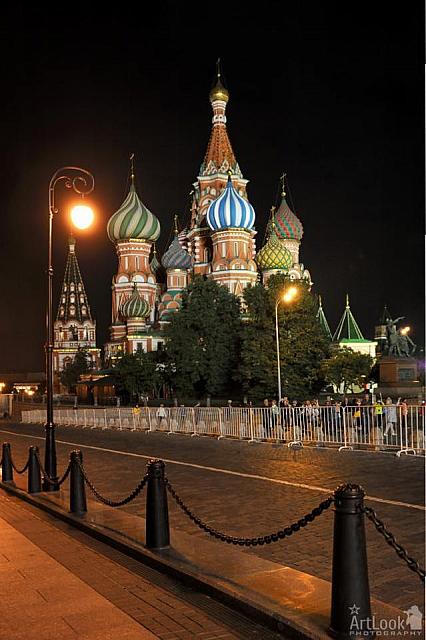 The view from a corner of GUM building on St. Basil’s Cathedral on the Red Square framed by illuminated street light.

The 46-meter-tall Intercession Cathedral on the Moat (originally called Pokrovsky Sobor) was commissioned by the first Russian Tsar, Ivan IV the Terrible, to commemorate his successful military campaign in the East and the taking of Kazan Khanate, the stronghold of the Golden Horde. The beautiful tent-roof church was built in the south part of the Red Square above Basil's Slope, which extends behind the church down to the Moskva River, by the best Russian architects in 1555-1561. Well-known as St. Basil’s Cathedral since the 19th century, this is one of the most famous landmarks of Moscow, Russia.

Photo #435 taken on August 13, 2016 during Moscow by Night tour with my dear client from New Zealand, Raewyn Durant.

Beautiful decorations of the sky from lighted in different colors at night flower balls above the street Bolshaya Dmitrovka during the festival “Moscow Spring”.