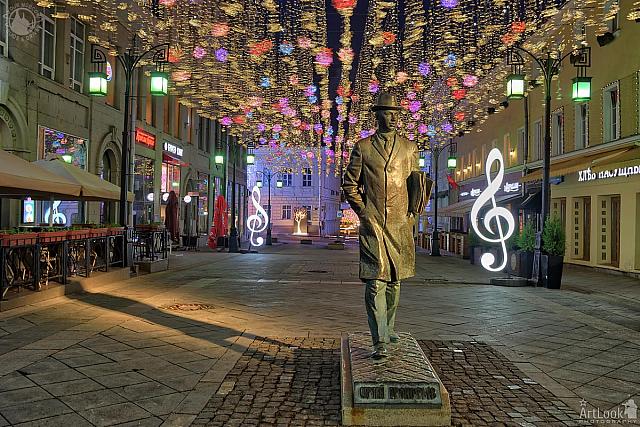 The bronze monument to the remarkable Russian composer Sergei Sergeyevich Prokofiev (27 April 1891 – 5 March 1953) between old-style streetlamps on Kamergersky Lane under lights of hundreds of bulbs imitating flowers and butterflies in spring night. The walking street is decorated with illuminated treble clefs for Moscow Spring A Cappella Festival and Contest (May 1-12), and definitely the signs perfectly relating to the monument. The monument was unveiled on December 11th, 2016, near the house-museum where lived Prokofiev (address: 6/5 Kamergersky Lane, Moscow), and timed to the 125th anniversary of the composer’s birth.

Overall view of Common Burial in Anosino in Summer with Flowers

Overview war memorial in the village Anosino in Istra district of Moscow region with a lot od flowers at the begining of summer season. The monument with statues of Soviet soldier and woman grieving over the common burial for their countrymen who were killed during battles for Moscow city in October-November 1941.