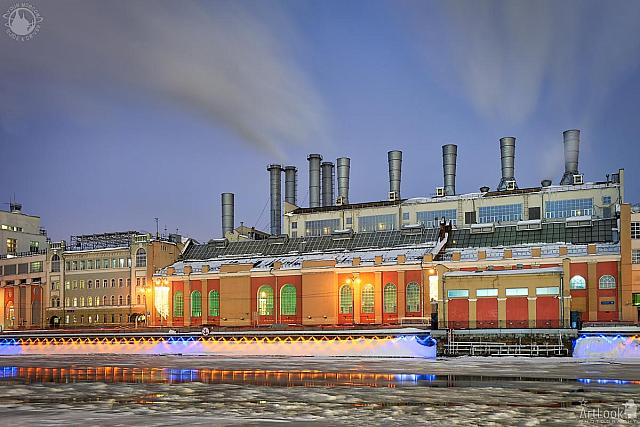 Smoke rises up from chimneys of Russia’s oldest heat and power plant on festively illuminated with spotlights Raushskaya Embankment of the river Moskva (Moscow) in winter twilight. The beautiful industrial landscape of the historical center Moscow was taken from Moskvoretskaya embankment.

The Power Plant #1 between Raushskaya Embankment and Sadovnicheskaya Street was laid in June 1896. According to one story, the facility was designed by architect Nikolai Basin and engineer A. I. Kolosov. Another story has it that the power plant was designed by Siemens & Halske in Charlottenburg, with Mr Basin providing the façade’s design. In 1906, it was rebuilt, and in 1930 was reconstructed, overgrown fashionable constructivist buildings received heavy-duty turbines and have since worked flawlessly, feeding electricity Kremlin in Moscow and a number of enterprises. It is the landmark of industrial architecture combining art deco and constructivist styles.