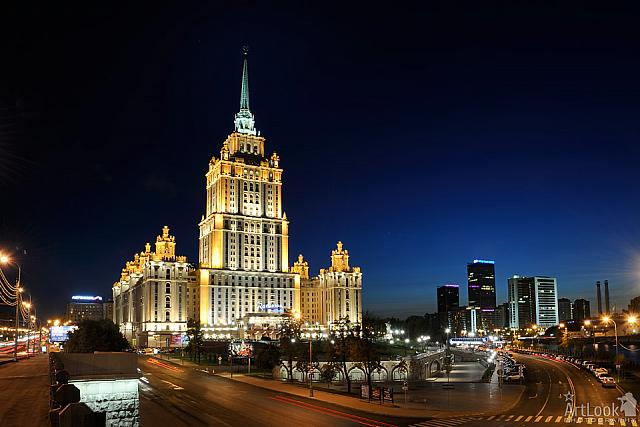 Located in the Moscow city center, on a bow of the Moskva River at the conjunction of Kutuzovsky Prospect and Novy Arbat, sits one of Stalin’s legendary “Seven Sisters” skyscrapers. The Radisson Royal Hotel, formerly known as “Hotel Ukraina,” looks very impressive at night. The building was designed by Soviet architects Mordvinov and Krasilnikov and constructed on the Embankment of Tarasa Shevchenko (Ukrainian poet, writer, artist, public and political figure) in 1949-1955. After an extensive 3-year renovation in 2007-2010, on April 28, 2010, Moscow’s Mayor Yury Luzhkov officially opened one of most luxurious hotels in Moscow, now under the name of the Radisson chain. A team of the best architects, designers and technicians meticulously restored the hotel’s exterior and the interiors of its 505 rooms and suites. With a height of 206 meters and very well illuminated, this impressive Stalin skyscraper is definitely one of the landmarks of Moscow and must be seen during your Moscow by Night tour!

"In the picture is a view of the luxury hotel Radisson Royal (former hotel Ukraina) and the Embankment of Tarasa Shevchenko of the Moskva (Moscow) River, where premium-class snow-white yachts dock and receive restaurant service from the hotel. The modern buildings in the background at the right are part of the complex of the World Trade center founded in the late 1970s in Moscow, right before Summer Olympic Games 1980.

Christmas street lights in the form of glasses of champagne on Prechistenskaya embankment in the background of the towers of Moscow Kremlin in one evening during winter holidays.