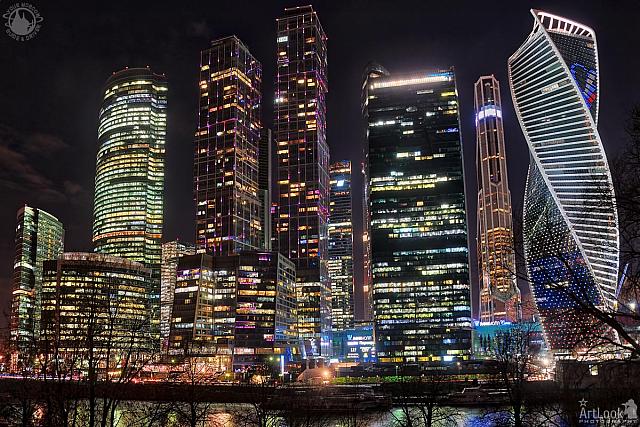 View from Tarasa Shevchenko Embankment on the modern skyscrapers of Moscow International Business Center "Moskva-City" (Moscow City). The commercial project of the modern financial district was founded in the central part of Moscow in 1996.

At right on the picture, the futuristic DNA-like shape building of Evolution Tower displays with LED lights the white, blue, and red Russian flag. It is the 53-story office building that has a height of 246 meters (807 ft). The Evolution Tower is designed by British architect Tony Kettle in collaboration with University of Edinburgh's Professor of Art Karen Forbes, RMJM architecture firm, and Philipp Nikandrov, chief architect of engineering firm GORPROJECT. The Evolution Tower uses the single-glazing facade with cold-mirror SunGuard High Performance glass from Guardian Industries for its windows. A continuous band of curved glazing with an area of 60,000 square meters (650,000 sq ft) with a constant inclination in the corners of the tower (approximately 14 degrees to the vertical) creates an optical illusion, reflecting Moscow panoramas turned upside down at an angle of 90 degrees to the horizon. In 2015 the Evolution Tower was nominated 2nd world’s best skyscraper in Emporis Skyscraper Award 2015. It became a finalist for the 2016 MIPIM Awards and for the 2015 CTBUH Best Tall Building Awards.

Another interesting skyscraper, the Mercury City Tower rises to the height of 338.8 m (1,112 ft) behind the Evolution tower. It is the mixed-use high-rise building of 75 floors that houses offices, apartments, a fitness center, and retail stores. The Mercury City Tower kept this record as the tallest building of Russia and Europe from late 2012 to the summer of 2014, in which it was surpassed by the South Tower of the neighboring OKO complex.

Oval shape Imperia (Empire) Tower stands at the left of Evolution Tower. It consists of two skyscrapers constructed in 2006-2018, the largest is 239 meters high and 60 floors can be seeing on the picture. A smaller one has only 14th floors. It is mixed-use complex that has offices, hotels, apartments, shopping centers, beauty salons and restaurants, observation desk (at the top of the main tower).

Two cubic-shaped towers of different height but the same design called “Moscow” and “Saint Petersburg” at the left of Imperia tower, in the middle of the composition. It was constructed in 2005-2009 and called “City of Capitals”. Moscow Tower is the taller of the two skyscrapers, with a height of 301.6 meters (990 ft) and 73 stories, St. Petersburg is a little lower and rises over the capital at the height of 258 meters. The multifunctional complex has offices, residential apartments, facilities for sports and relaxation, swimming pool, a SPA center, a fitness club, a restaurant, a cafe - bar, a parking for 2100 cars.

The “Naberezhnaya Tower” (Tower on the Embankment) is a complex of modern hemisphere-shaped skycrapes at the left on the picture. The office complex composed of two skyscrapers and a high-rise named after the first three letters of the alphabet and from the lowest height to the tallest: the 17-story tall Tower A, the 27-story tall Tower B.

Between the towers of Moskva-City financial districts is located one of the biggest and best in Moscow and Europe shopping center AFIMALL City.

Photo #952 taken on February 14, 2020 during Moscow by Night tour with my Dear clients from Mexico, Xavier and Antonio.

View from Manezhnaya square on the illuminated Upper Alexander Garden along the fortified wall of Moscow Kremlin in early spring morning at twilight.