Lighting up the Night 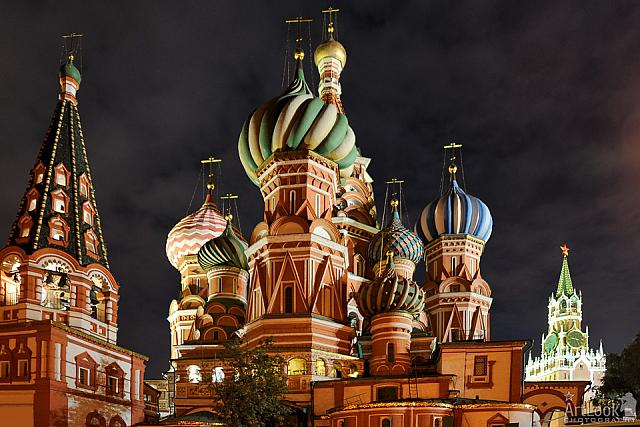 «Lighting up the Night»

The view of St. Basil’s Cathedral with bell tower at night from the building of former Middle Trading Rows, the next building after the GUM (Upper Trading Rows) along the eastern side of Red Square. The main tower of Moscow Kremlin, the Savior tower, with clock is in background at the right on this picture.

The 46-meter-tall Intercession Cathedral on the Moat (originally called Pokrovsky Sobor) was commissioned by the first Russian Tsar, Ivan IV the Terrible, to commemorate his successful military campaign in the East and the taking of Kazan Khanate, the stronghold of the Golden Horde. The beautiful tent-roof church was built in the south part of the Red Square above Basil's Slope, which extends behind the church down to the Moskva River, by the best Russian architects in 1555-1561. Well-known as St. Basil’s Cathedral since the 19th century, this is one of the most famous landmarks of Moscow, Russia.

The large standalone bell-tower of St. Basil’s Cathedral was built in 17th century during the reign of Tsar Alexis I at the Cathedral’s southeastern corner, right on the site of demolished old detached belfry which basement was reused for the new bell tower. The tower for bell ringing was adorned with tall single tented roof in the vernacular (Russian) style that can be seen from all sides of the church, including its western part.

Photo #427 taken on August 13, 2016 during Moscow by Night tour with my dear client from New Zealand, Raewyn Durant.

The residence of HM Ambassador of Great Britain in Moscow after heavy snowfall in winter twilight. The elegant, eclectic mansion at 14, Sofiiskaya Naberezhnaya (Sofia Embankment) opposite Moscow Kremlin which long served as the British embassy in Moscow, was originally commissioned by the sugar-beet king and art collector Pavel Kharitonenko.