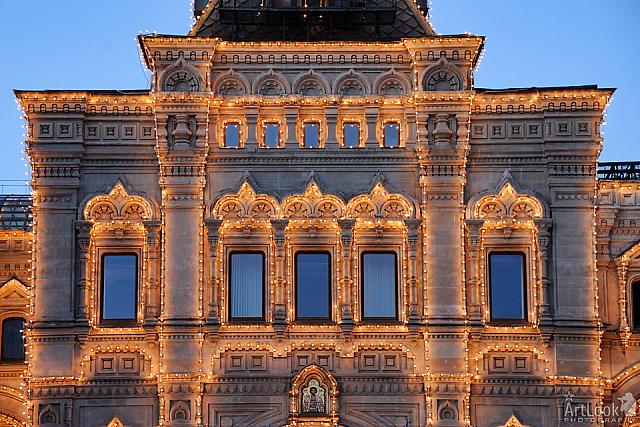 On the eastern side of Red Square are the renowned buildings of GUM, where every night since 2005, the store’s windows are illuminated by thousands of sparkling lights, providing a holiday atmosphere every night of the year in the country’s most famous square!

Built at the end of the 19th Century as Upper Trade Rows, during Soviet times the buildings were known as GUM, which is the Russian abbreviation for the State Department Store (and where the G now stands for Glavny – or “main” in Russian. The building no longer belongs to the State, but is currently rented by the Bosco di Cigiegi Group who have a lease on the building until 2059. A Russian company, the Bosco group were founded in 1991, and today are one of the leaders of the premium retail trade in Russia.

In this photo you can see the beautiful Neo-Russian style windows above one of the entrances to the Upper Trade Rows. The entrance is decorated with an icon (commonly used to protect a building) of the Saint, Alexander Nevsky (1220-1263) – the great Russian Prince, military commander and diplomat, commonly regarded as the key figure of medieval Russia. Born in 1220, Alexander was elected Grand Prince of Novgorod in 1236, and was married 3 years later. In 1240 he defeated the Swedes at the confluence of the Ithara and Neva Rivers, at which time he earned the name “Nevski”. Two years later he routed the Teutonic Knights whom Pope Gregory IX had commissioned to Christianize the Baltic region.