The Heavenly Kingdom on Red Square at Spring Twilight 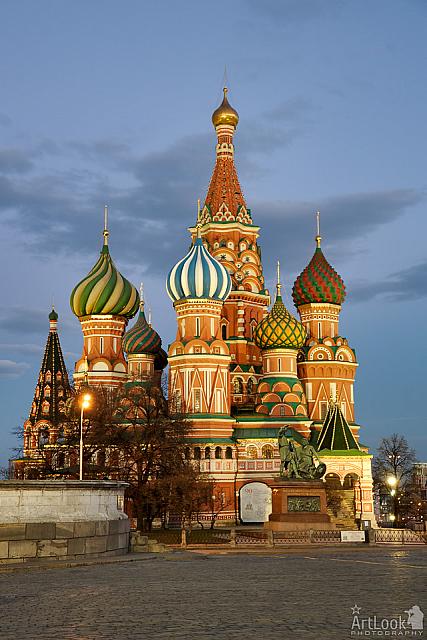 «The Heavenly Kingdom on Red Square at Spring Twilight»

The view of Pokrovsky Sobor (Intersession cathedral), the original name of St. Basil's Cathedral, on Red Square in Moscow, when lights were just on against the darkening sky at the begining of April, 2014. The church's design is based on deep religious symbolism and was meant to be an architectural representation of the New Jerusalem - the Heavenly Kingdom described in the Book of Revelation of St. John the Divine.

The famous St. Basil's Cathedral was commissioned by Ivan the Terrible and built on the edge of Red Square between 1555 and 1561. The cathedral was built to commemorate Ivan the Terrible's successful military campaign against the Tartar Mongols in 1552 in the besieged city of Kazan. Victory came on the feast day of the Intercession of the Virgin, so the Tsar chose to name his new church the Cathedral of the Intercession of the Virgin on the Moat, after the moat that ran beside the Kremlin. The church was given the nickname "St. Basil's" after the "holy fool" Basil the Blessed (1468-1552), who was hugely popular at that time with the Muscovites masses and even with Ivan the Terrible himself.

St. Basil's is a delightful array of swirling colors and redbrick towers. Its design comprises nine individual chapels, each topped with a unique onion dome and each commemorating a victorious assault on the city of Kazan. In 1588 the ninth chapel was erected to house the tomb of the church's namesake, Basil the Blessed. The eight onion dome-topped towers are positioned around a central, ninth spire, forming an eight-point star. The number eight carries great religious significance; it denotes the day of Christ's Resurrection (the eighth day by the ancient Jewish calendar) and the promised Heavenly Kingdom - the kingdom of the eighth century, which will begin after the second coming of Christ. The eight-point star itself symbolizes the Christian Church as a guiding light to mankind, showing us the way to the Heavenly Jerusalem and it represents the Virgin Mary, depicted in Orthodox iconography with a veil decorated with three eight-pointed stars. The cathedral's star-like plan carries yet more meaning - the star consisting of two superimposed squares, which represent the stability of faith, the four corners of the earth, the four Evangelists and the four equal-sided walls of the Heavenly City.

The design of the International Moscow Bike Center and Club "Sexton" was taken from the popular movie "From Dusk Till Dawn" and all design, accessories here were handly made by members of the Club.