Walking to the main visitors' entrance into the Kremlin 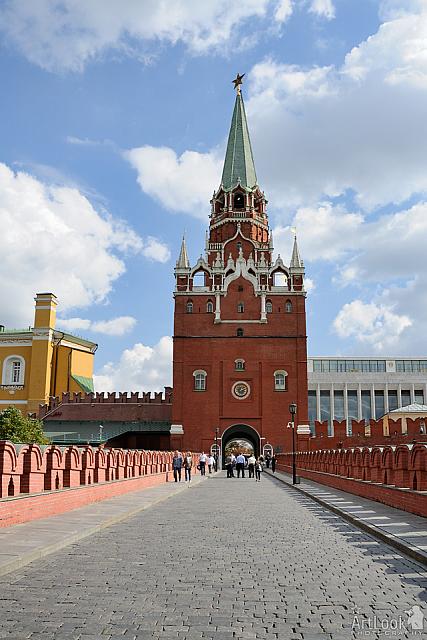 «Walking to the main visitors' entrance into the Kremlin»

After passing the security check at Kutafya Tower, visitors of Moscow Kremlin walk over to the Troitsky Bridge connecting it with Troitskaya Tower, the main public entrance to the Kremlin. Both the bridge and the tower received their current names in the middle of 17th century from the Troitskaya Coaching Inn in the Kremlin and dedicated to the Trinity (Troitsa). The Trinity Tower is the tallest tower of the stronghold of Moscow city with, its current height on the side of the Alexander Garden, if you count the star, being 80 m (262 ft). The tower was built from bricks in 1495-1499 by an Italian architect Aloisio da Milano (known in Russia as Aleviz Fryazin Milanets). On the wall of the tower, right above the entrance gate, was an icon of the Holy Trinity served to protect the gate and the city, but it was removed in Soviet times, because this tower was the formal entrance for the huge Communist Party Congresses.

Photo #001 taken on September 09, 2014 during tour of Moscow Kremlin with my Dear clients from USA, Irwin and Marcela Becker.

View from Berezhkovskaya embankment on the riverboat at pier "Kievskaya" (near metro station Kievskaya and square of Europe) in Moskva (Moscow) River under a heavy snowfall of the century at the beginning of February 2018. Steel plate girder bridge “Borodinsky” (called in honor of battle “Borodino”) spanning Moskva River and Stalin buildings on Smolenskaya embankment in the background of the picture.