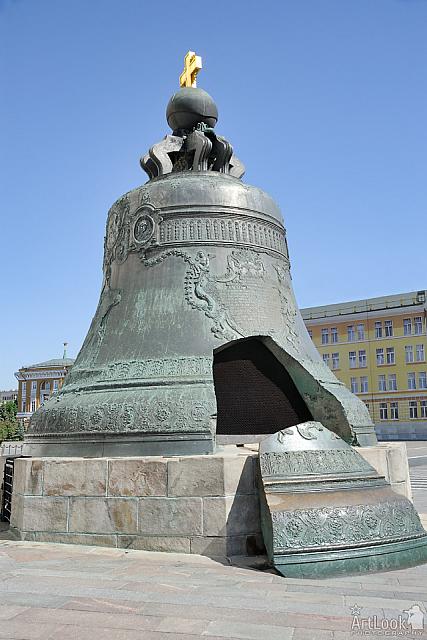 The Tsar Bell (Czar Bell), a masterpiece of the Russian casting technology of the XVIII century, stands on granite pedestal next to the Ivan the Great Bell tower. It was cast in 1733-1735 on the order of empress Anne Ioannovna by the casting-masters Ivan Motorin and his son Mikhail. Up till now the Tsar Bell is considered to be the biggest one in the world. It weights about 200 ton and is 6,14 meter high. Its diameter is 6,6 m.

In 1735, the Tsar Bell was finally cast. However, it still remained in the moulding pit. In May, 1737, a terrible Troitskiy (Trinity) fire broke out in Moscow and spread to the Kremlin buildings. When the flames on the scarffolding around the bell were being extinguished, cold water fell on the bell itself. The difference in temperature caused it to crack, and a huge piece of 11,5 ton broke off.

In 1836, the Tsar Bell was lifted up from the moulding pit and placed on a stone pedestal by French architect Auguste Montferrant (also built the famous Isaac's Cathedral in St. Petersburg).

The Tsar Bell is decorated with bas-relief portraits of Tsar Alexey Mikhailovich and empress Anna Ioannovna, also adorned with vegetation ornament in the baroque style and images of saints, angels and inscriptions telling the story of the bell.

Photo #105 taken on May 27, 2015 during tour of Moscow Kremlin with my dear client from USA, Jochen Steppan.

The Carved Stone from Jerusalem

This carved stone was brought to Vladimir from Jerusalem during construction of the cathdral of St. Demetrius in 12th century.