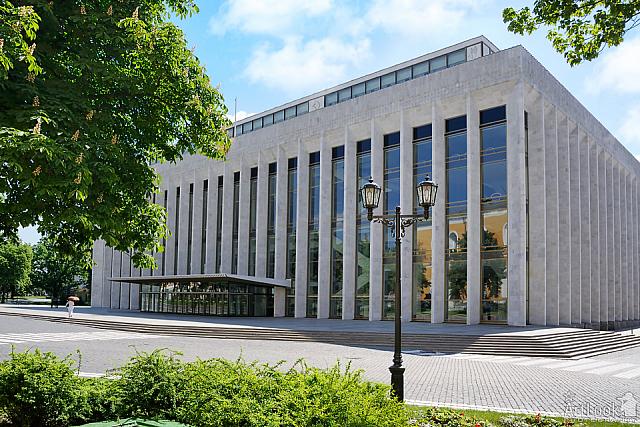 The State Kremlin Palace was erected on the grounds of Moscow Kremlin in 1961 as the Kremlin’s Palace of Congress to the order of famous Soviet leader, Nikita Khrushchev. The bulky concrete and glass structure looks as a huge box of glass and white marble. Although originally intended for Communist Party conventions, the multipurpose building has also seen music concerts, ballet, opera, and other performances over the years until present time.

Incidentally, the modern Congress Palace building was the reason why UNESCO did not put all the Moscow Kremlin on its World Heritage List.

In some way, the State Kremlin Palace is like an iceberg, and not only because it looks like a cold, white chunk of ice. Similarly to an iceberg, the bulk of its structure is hidden as deep as 15 meters underground. The building has over 800 rooms, including 6,000-seat conference room with enormous stage. Today, the palace is better known as Moscow’s most prestigious performance venue.

Photo #069 taken on May 23, 2014 during tour of Moscow Kremlin with my Dear clients from USA, Suzanne, Steve and Alex Plotkin.

Johnny Weir & St. Basils Cathedral: "Such a beautiful sight ... one I could hold tight and never let go!"