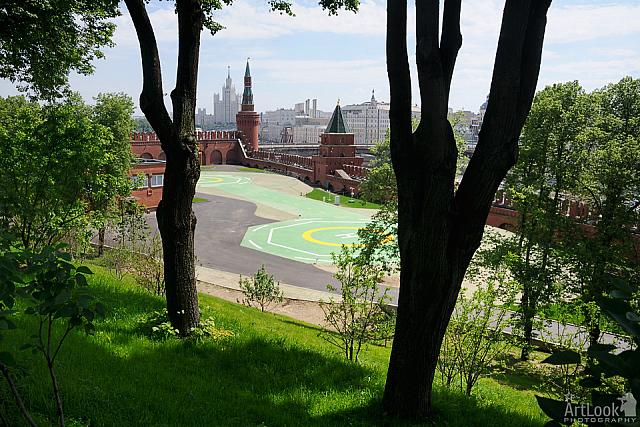 View through the trees at the Kremlin's Tainitsky Garden of the new helicopter pad for the President of Russian Federation. All stages of construction, including land survey works, modeling and landscaping for using President Putin’s Mi-8 Helicopter in the Kremlin was finished in the middle of May, 2013 and cost almost 200 million rubles (about 6.5 million USD).

In the background of this picture, behind the towers and walls of Moscow Kremlin, you can distinguish Stalinist high-rise apartment building - one of the seven famous skyscrapers ("Seven Sisters") built at Stalin's orders in the middle of the twentieth century.

More photos with this vew: Kremlin Helipad and Towers Framed by Trees.

Photo #802 taken on June 01, 2013 during tour of Moscow Kremlin grounds and cathedrals with my Dear client from USA, Gene Ragan.