The Famous Kremlin's Clock and Gorgeous Decor of Savior Tower 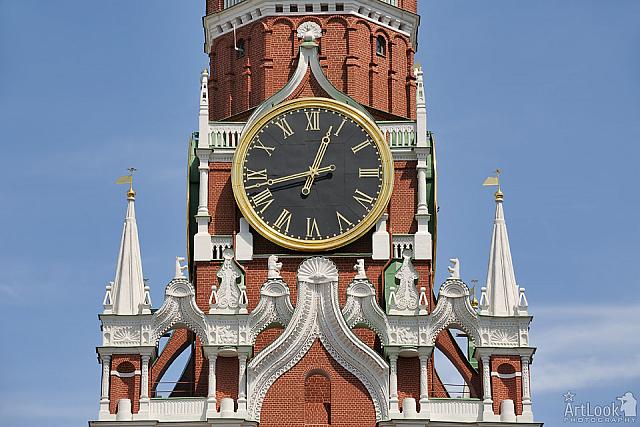 «The Famous Kremlin's Clock and Gorgeous Decor of Savior Tower»

Close-up view from the grounds of Moscow Kremlin of the clock and rich decor of the Kremlin's most famous tower, Spasskaya (Savior's) tower located on the Red Square and originally was built in 1491 by Italian architect Pietro Antonio Solari. At the beginning of 17th century, in 1624-1625, the tower was overbuilt and the first clock with chimes was made and installed on the slender gorgeous tower decorated with lavish carved white stone.

In present-day, the tower boasts its 3-rd version of the clock and chimes installed by the Brothers Butenop Company in 1851-1852. Clockwork occupies three stories and consists of three blocks: main mechanism and quarter-hour-striking mechanism. The clock has four dials located on every side of the tower; each dial is 6.12 m in diameter; the dial number are 72 sm high; the hour hand is 2.97 m long and the minute hand is 3.28 m long. Hours are marked with gilded Roman numbers, minutes are marked in small squares. A 32-kg pendulum maintains the accuracy of the clock's mechanism. The total weight of the clockwork is ca. 25 tons.

Until 1917, the clock chimes the tune of the anthem, Glory to Our Lord in Zion, and Preobrazhensky March. In the Russian Empire, Glory of Our Lord was played during church ceremonies involving troops. In October 1917, during the revolutionary upheaval, the clock was damaged. Mechanic Nikolai Berents and musician Mikhail Cheremnykh, who repaired the clock in 1920, set it to play L'Internationale at noon, and You Perished Like Heroes in the Battle of Doom, at midnight. The tune were replaced with bell chimes in 1932.Today the clock chimes the Russian national anthem at noon and midnight.

Photo #103 taken on June 29, 2016 during Moscow Kremlin tour with my dear clients from Lebanon, Bernadette and Jacques Saade.

Smolensky cathedral is the main and the oldest church built on the grounds of Novodevichy convent, founded by the Grand Duke Vasiliy III (Basil the Third) in the beginning of 16th century. The Russian-Byzantine style cathedral was constructed using the money of the Moscow prince in 1525.