The Assumption Belfry and Ivan the Great Bell Tower 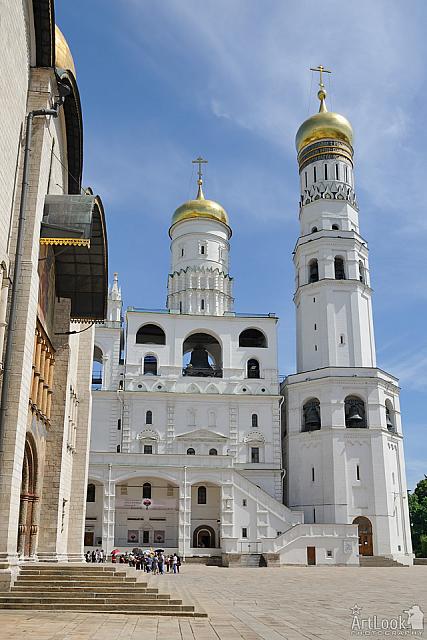 «The Assumption Belfry and Ivan the Great Bell Tower»

View from a corner of Assumption Cathedral on the architectural ensemble of the Assumption Belfry (at the left) and Ivan the Great Bell Tower (at the right) built in the Moscow Kremlin in 16th century. The tower’s name implies that it had once housed St. John’s Church, and that it used to be the tallest building in Moscow (height with cross is about 80 m). For many decades the bell tower was also the main watchtower in the Kremlin, and later also a fire tower. Petrok Maliy, the Italian architect who built the Kitai-Gorod wall in Moscow, started the construction of the church of the Resurrection, later renamed Church of the Nativity, next to the Ivan the Great Tower in 1532. Decades later was converted to a four-tier belfry for large bells, known today as the Assumption Belfry after its main 64-ton bell placed in the middle of the fourth tier. The Assumption bell tolled only on great holidays and to announce events of exceptional significance.

Photo #043 taken on June 29, 2016 during a tour of Moscow Kremlin with my dear client from Lebanon, Jacques Saade.

Birth of the Universe – Spectacular Fireworks at Krylatskoye

Spectacular fireworks of different colors and shapes light up the night sky over Krylatskoe Rowing Canal (Grebnoy Kanal) during closing ceremony of the annual Circle of Light International Festival on September 27, 2016 at in Moscow. The shapes of the fireworks on the picture can be easily associated with images of stars, planets and comets after the one enormous explosion of energy from which our universe began according believes of scientists.