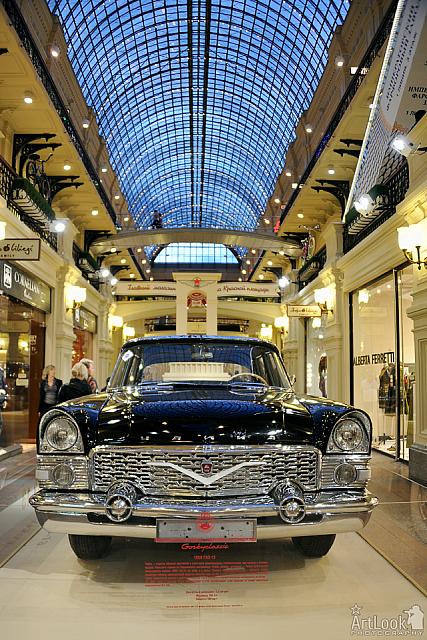 On August 10th, 2014, in the legendary GUM, an exhibition of classic Soviet cars was opened, dedicated to the anniversary of Russia’s main department store. The exhibition was organized by Gorkyclassic project, the movement of collectors and renovators of classic Soviet cars, founded in 2009, which now unites hundreds of people in different regions of Russia – from Kaliningrad to Siberia.

On this picture is the front of the famous Soviet luxury car GAZ-13 «Chaika», shining with chrome parts under glass roof of GUM building on late August evening. It is a 1959 model. The marvelous «Chaika», which translates as seagull (whose shape can be recognized on the front of the car), was frequently used for parades, as an official car for Soviet leaders and a number of these cars were ordered by KGB authorities.

Photo #106 taken on August 28, 2014 during Moscow night tour with my Dear client from USA, Cecilia Choy.

The Cathedral of the Holy Vivifying Trinity at Winter Night

The beautiful Cathedral of the Holy Vivifying Trinity with blue domes was built at Borisovo Ponds in 2004 in Byzantine style to commemorate 1000 anniversary of the baptism of Holy Russia.