Infantry Firing a Gun Salute in the Figure “Circle” 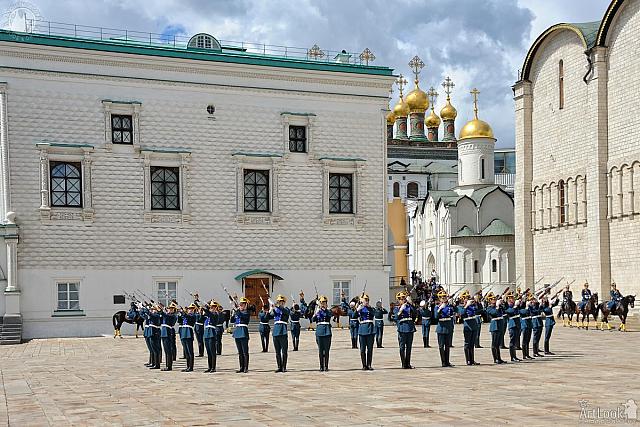 «Infantry Firing a Gun Salute in the Figure “Circle”»

Infantry of Kremlin Regiment performs salute from SKS rifles (Soviet semi-automatic carbine designed in 1943 by Sergei Gavrilovich Simonov) in the figure “Circle” at the end of the foot part of the Ceremonial mounting parade of Horse Guard and Foot Guard of the Presidential Regiment on the Cathedral Square at Saturday noon. Uniforms of the foot guards are similar to the uniforms of the Imperial Guard regiments from the time of Tsar Nicholas II. Despite the fact that their rifles set only with blank cartridges after the fire people always surprisingly exclaim after the quite loud shot around the square in Moscow Kremlin from many guns in one time.

Photo #170 taken on July 06, 2019 during the tour of Moscow Kremlin with my Dear clients from Australia, John and Mira Garland.