Guards of Honor Return to their Duty Stations 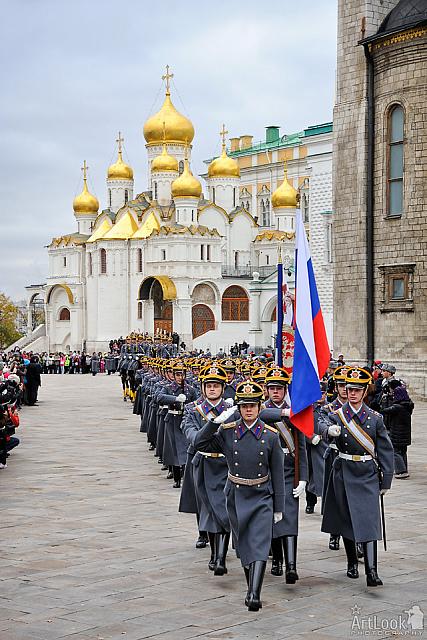 «Guards of Honor Return to their Duty Stations»

Reestablished in 2005, the ceremonial changing of presidential guards in Cathedral Square at the Moscow Kremlin became one of the most fascinating military parades in the world. Visitors of Moscow Kremlin can see it at noon every Saturday throughout the summer season (from April until October), when the weather is warm enough. The Kremlin guards perform a ceremonial changing of the guard involving infantry and cavalry in resplendent tsarist-era uniforms, reviving a tradition first started by Peter the Great.

On Saturday October 18th, 2014, another season has come to an end for these talented and good-looking guards. On the picture, the infantry leaves the main square of Moscow Kremlin, Cathedral Square, after finishing the last guard mounting in this year and their officer marching with a raised hand in salute. In the background you will notice shining golden domes of Annunciation cathedral, domestic church of princes and tsars built by architects from Pskov in 1484-1489. On the right, you'll notice a corner of the grand stone Cathedral of Dormition (Assumption).

Photo #054 taken on October 18, 2014 during tour of Moscow Kremlin with my Dear clients from Hong Kong, Victor and Rita Wong and their son Adrian.

New year Suzdal winterscape with the view from Gostinny Dvor (Guest Yard) building on the illuminated Christmas tree at the Kremlevskaya (Kremlin) street (at the left on the picture). Covered snow old one-story building of Slavyanskiy Bar Restaurant with another tree illuminated with Christmas garlands is in the background of the picture.