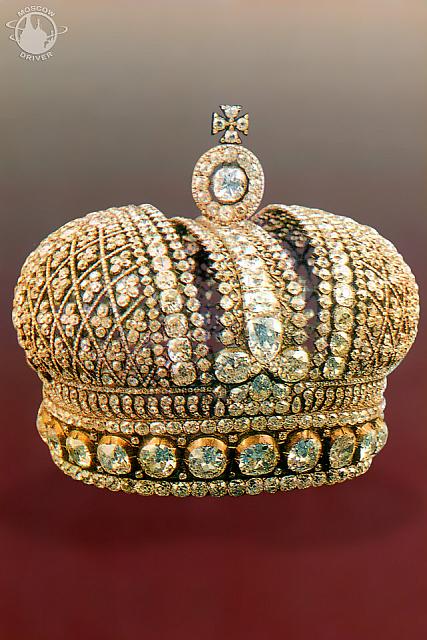 Features: The crown seems to be woven of diamond lace mounted in silver, and it is hard to believe it weighs 378 grams: there are 48 big (from 2 to 9 carats) and 200 small diamonds in it
Origin: made in 1855 by the court jeweler Leopold Zeftigen for the coronation of Empress Maria Alexandrovna, wife of Alexander II.

Princess Luise Maria Augusta, a daughter of Karl Ludwig Markgraf von Baden, arrived in St. Petersburg in October 1792. Catherine the Great intended to make her a wife for her beloved grandson Alezandre. Her plans were doomed to come true. Less than a year after on September 28, 1793, a magnificent wedding ceremony of the Grand Duke and Luise Maria Augusta took place. She got the name Elizaveta Alexeevna when converted to the Russian Orthodox Church. The newly weds were extremely young: the groom was just over 16 and his bride 15 years old. Seven and a half years later Alexandre succeeded to the Russian throne. The so called Small (Maly) Imperial crown was intended to be worn by the tzar's spouse at the coronation ceremony. It had to be made in the shortest time possible as her husband came to power quite unexpectedly, after assassination of his father, emperor Paul, stabbed on the night of March 11, 1801. The state regalia in the Diamond Fund display include the beautiful Small Crown, which Academician Alexander Fersman attributed to the famous court jeweller of the mid-eighteenth century Louis-David Duval. Fersman was of the opinion that"... in execution and beauty the small crown should rank immediately after the large one, and attributed ... to the time of Paul I.” Evidence later came to light showing that the small crown was the work of Duval's sons, the brothers Jacob and Jean-Frangois-Andre Duval, court jewellers of the late eighteenth and early nineteenth century, who were almost as famous as their father. M.B.Martinova's research links the making of the small crown with their names, because Duval senior died in the late 1790s. For a long time it was thought that the Duval brothers made the small crown for Empress Elizaveta Alexeyevna, the wife of Emperor Alexander I, in 1801. In 2002 the magazine Russky antikvar1 [Russian Antiquary] published a work by R.Gafifullin proving on the basis of documental evidence that the Small Crown (ill. 1) from the Diamond Fund collection was made in 1855 for the coronation of Empress Maria Alexandrovna, wife of Alexander II, by the court jeweller Leopold Zeftigen. Maria Alexandrovna bequeathed the crown together with other possessions to the Diamond Cabinet collection, which meant that for the coronation of Alexander III, the small crown was ready for his wife, and for the first time there was no need to make a new one. Zeftigen inserted diamonds in place of the stones that had been removed after the previous coronation, and prepared the crown for the new ceremony. Since each new small crown was almost an exact replica of the earlier ones, Louis-David Duval, it seems, could be regarded as the author of the design, the jeweller who made the crown for the Empress Maria Fyodorovna, wife of Emperor Paul I.

Monument to the Leaders of the "Big Three" in Livadia

The bronze composition dedicated to the 70th anniversary of the meeting of the leaders of the anti-Hitler coalition countries, Joseph Stalin, Franklin Roosevelt and Winston Churchill, weighing about 10 tons, was created by prominent Russian sculptor and architect Zurab Tsereteli.