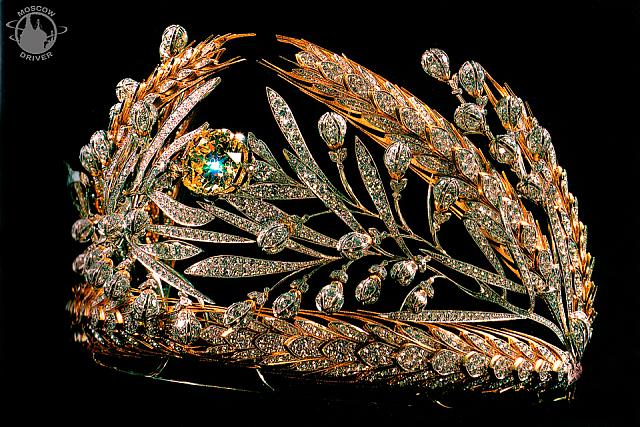 The Russian Field diadem by Viktor Nikolayev and Gennady Alexakhin was the first in a series of works aimed at recreating pieces of nineteenth-century Russian jewellery that had been lost. Unfortunately, as already mentioned, many fine works of that period did not survive. They can only be seen in portraits, a few rare photographs or drawings, so Gokhran (the State Precious Metals and Gems Repository) took upon itself the task of giving a second life to some of the lost works of those years. The Russian Field Diadem was created by contemporary masters from the motifs of a superb diadem in the form of a wreath of ripe ears of rye and blue sapphire cornflowers. The diadem is not a reproduction of a lost masterpiece, not a copy, but an independent work intended to recreate the image of jewels from the Imperial treasury that have not survived. Nikolayev interweaves the ripe rye ears not with cornflowers, but with tiny flowers and buds of flax. The master fastens the flowers and buds to the stalks freely, so as to emphasis the beauty of the large central diamond with a golden tinge, weighing 35.52 carats, which symbolizes the sun in the composition. The diamonds used in the diadem are all colorless, yet the spectator not only sees white stalks and flowers, but also ears of a deep golden hue. This effect is achieved by using two precious metals, gold and platinum. The setting for the diamonds adorning the ears of rye is made of gold. It colours the diamonds with reflections of its own warm shade, which makes the whole composition lively and expressive.

View from Raushskaya embankment of Moskva-Reka (Moscow River) on the Floating Bridge and Pier of Zaryadye Park at Moskvoretskaya Embankment festively decorated with colorful balls, paradise trees, and Christmas garlands in the background of Moscow landmarks, St.