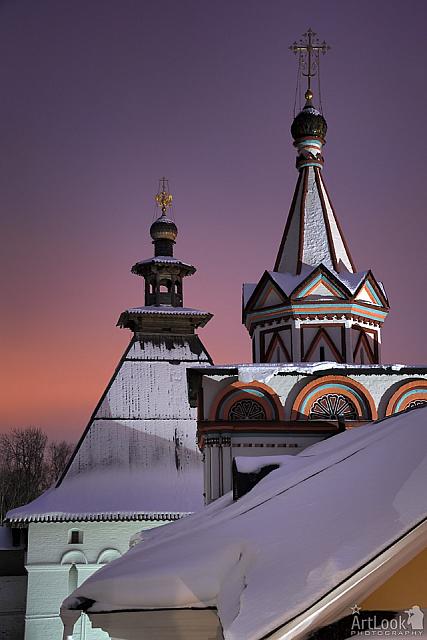 The view from bell tower of Savvino-Storozhevsky monastery of tent-roofs of Krasnye Vrata (Red Gates) (at the left) and the Trinity Church (at the right) at Twilight in a cold winter evening on the day of Epiphany (January 19).

The Gate Church of the Holy Trinity was erected in 1652. It is one of the most elegant structures in the whole architectural ensemble of Savvino-Storozhevsky monastery constructed on money commissioned from Tsar Alexis (Aleksey Mikhailovich), father of Peter I (The Great). The church was completed after Patriarch Nikon’s decree banding tent-roofs over churches as not being in line with ancient Bysantine cannons.

Night scene of Mausoleum, the memorial burial-vault, where a crystal sarcophagus with the body of Vladimir Lenin lies in the Hall of Mourning. The tomb was built in 1930 to the plans of architect Alexius Schusev and substituted the temporary wooden mausoleum erected in January 1924 in middle of Red Square after death of the leader who founded the Russian Communist Party, led the Bolshevik Revolution and was the architect of the Soviet state.